Band flyers and local music magazine ads were the social media tools of the 1980s – so unlike the intangible, fleeting images of today’s band sites and events. Back then band flyers and local rags were simply good advertising – you grabbed them and took them home and they were like Facebook Event Notices sitting on your dresser all week.

I’ve posted all of the band/club flyers I’ve managed to hang on to from our good times in the Sunset Strip era below (in alphabetical order).

The majority of these were collected from band members handing them out on the Strip or in the Rainbow-party-in-the-parking-lot or other clubs. Some were saved to remember the show date/time/place, some were found wadded up in my purse the next morning, and some were sent to me from a friend when I went home to Florida. Some of these bands are a complete mystery to me, but thanks to google I was able to find out a bit more about some of them.

If anyone has any information on any of the bands or musicians below, just let me know and I’ll be happy to update the information and add any links.

My Riki & Taime’s World Famous Cathouse Hollywood membership card. As a member I received the Cathouse newsletters via U.S. Mail posted below. I can tell from my flyers  that I must have lost my card and got a new one at some point because some are addressed to my real name and some are addressed to Sandie Beach, which I’ve been known to use for fun at times ;o).

Undated but talks about upcoming events in September, 1987.

Slash may not have been thrown out, but I saw him CARRIED out, not once but twice. It took two guys – Slash had his arms around each ones’ shoulders, and each guy carried a leg – to carry him down the stairs. Both times it was as we were arriving. Why on earth I remember this image clearly (and not so many other things) is just odd.

The filming was for Penelope Spheeris’ documentary Decline of the Western Civilization Part 3: The Metal Years. I was there for that, and I also happened to be at Gazarri’s when she was filming there (pretty sure we saw Hurricane that night). Link intentionally missing…I need to watch that again to remember why I never liked it.

Page 2 of 4 – Good history of the club here. Ah typewriters.

Page 3 of 4 – Moving to have clean glasses? lol

Page 4  of 4 – This is apparently the form I used to get my membership card.

Postmarked September 14, 1988 and mentions the two year anniversary. Page 1 of 2.

I remember seeing The Cult at the Scream, another nightclub, so I probably picked this up at that show. I’m told we also saw GnR open for the Cult in Long Beach that same week. 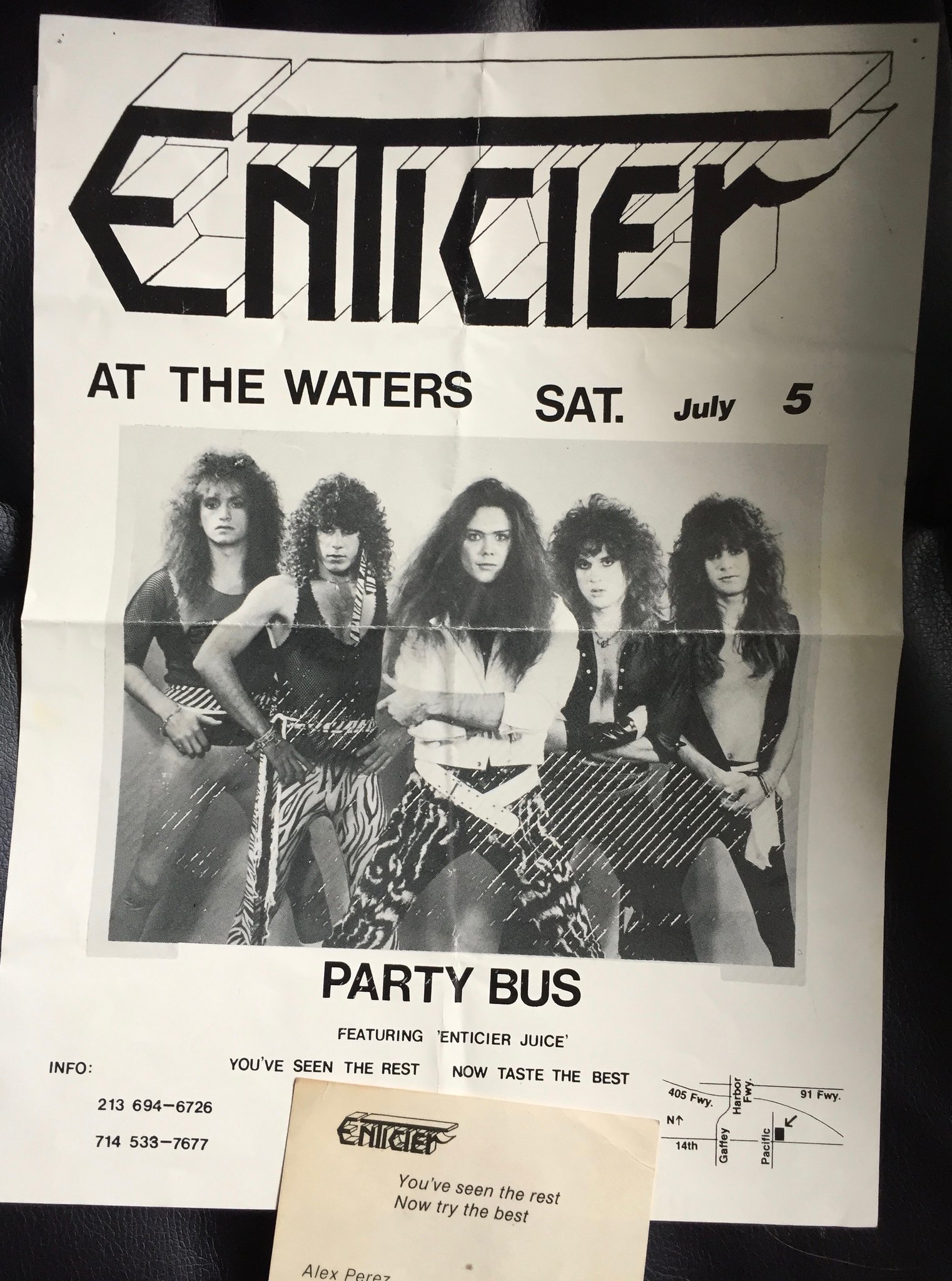 I remember nothing about this band, although I do remember going to the Waters Club a few times. Enticier juice lol? Update: Per H’Air Apparent in the comments below, this band featured Pat Guyton (now a well-known fine arts painter) and Marco Forcone before they joined Leatherwolf, which became Hail Mary. 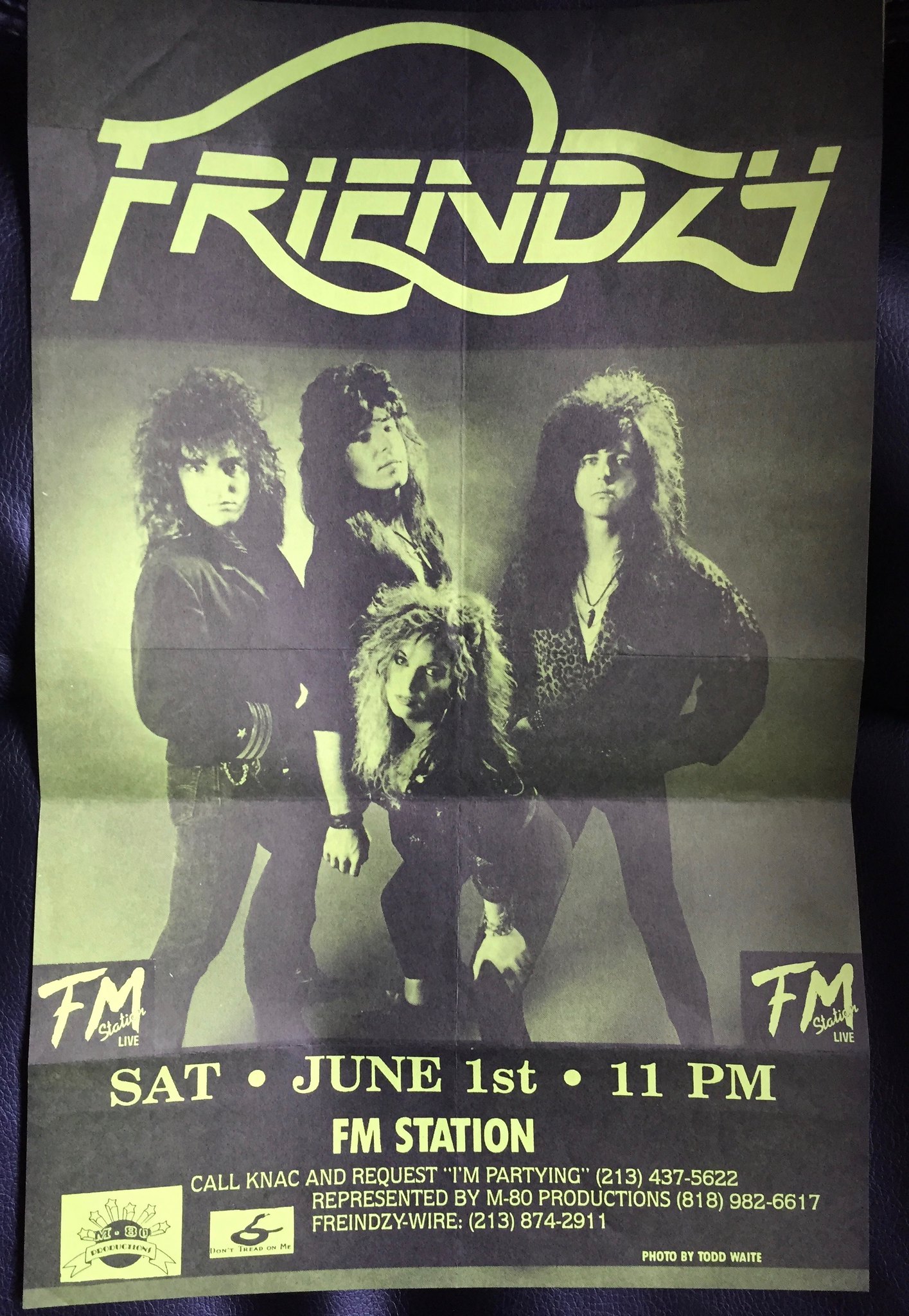 The FM Station was in North Hollywood (where I lived) – we had some good times and saw some good bands there. It was torn down a few years ago. About this band from my long-time pal Brett Miller: “Friendzy featured Laurie Rox (my friend from Seattle), her husband Joey from Roswell NM on guitar (left), Greg from Rhode Island (center) drums, me (right) on bass. Headlined a few shows before imploding. Fun band. Ozzy Osborne was at this show and came to our North Hollywood band house after-party (with his bassist Mike Inez, now with Alice In Chains) and held court in Joey’s master bedroom where we granted audience to many friends to go in a talk to him one-on-one. I asked Ozzy if “Earth” was really Black Sabbath’s first name, and he said “No, it was the Polka Dot Blues Band” (truth). It was my last hurrah grabbing for the brass ring before I quit music and left for Computer Graphics vocational college. I’m never sorry I left Seattle to go for my dream. I got to play all the big famous clubs, Troubadour, Roxy, Whisky a Go Go. I was at Riki Rachtman’s Cathouse on opening night and every Wednesday after that. I made great friends from around the country, guys and girls, all of us feeling like we were living the dream. We were, and no matter how people might make fun of the hair band era, it was glorious. A year later Nirvana would happen. [Big thanks to my BFF Sandra Hebert who found this poster, and was there with all of us, an 80’s version of “Friends.”)” Good times, good times ;o). 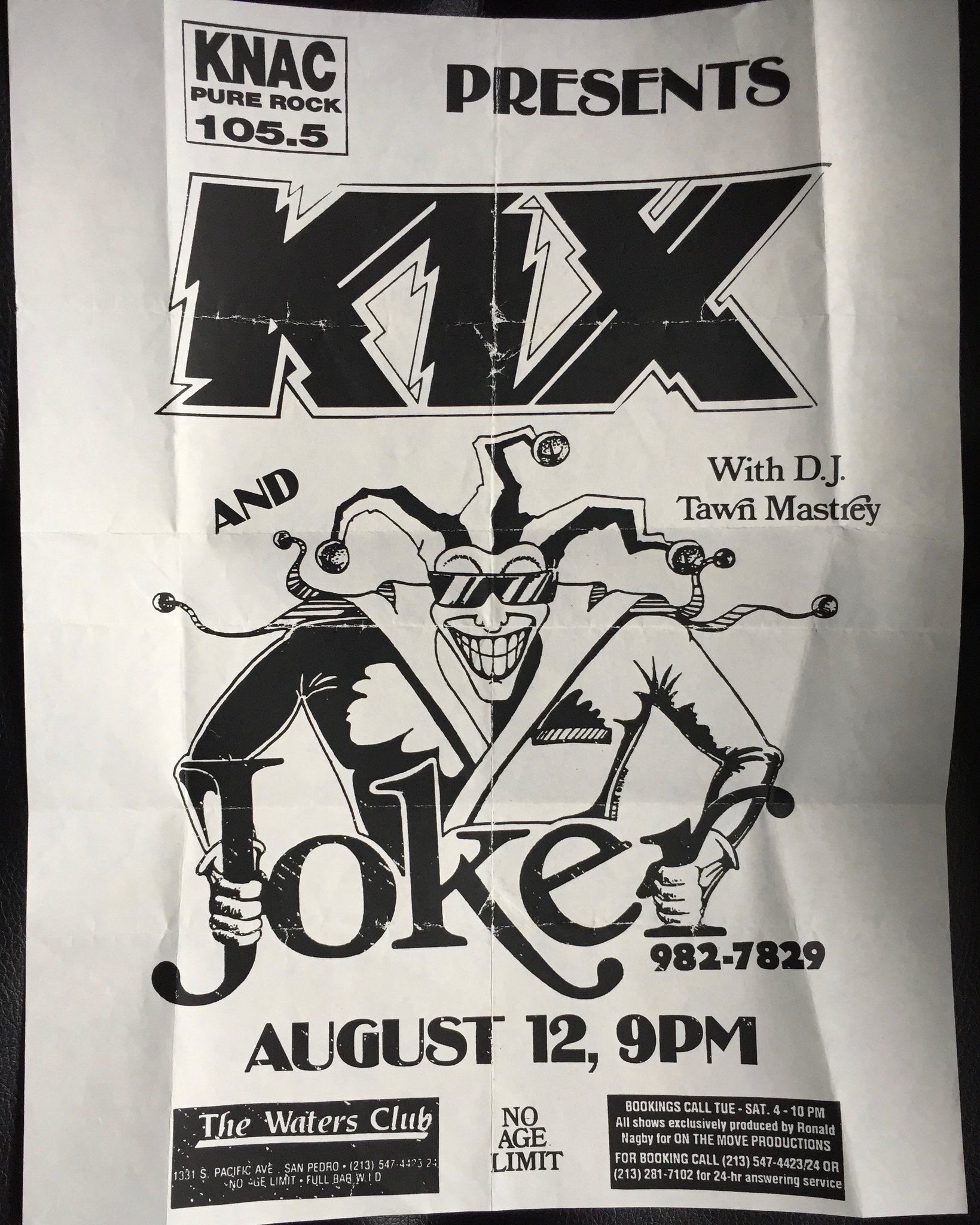 I remember we saw Kix hanging at the Rainbow that week. Tami tells me she clearly remembers Steve Whiteman was wearing red high top Converse in a sea of leather boots, and that I followed him around all night lol. Interesting story on KNAC and Sirius-XM’s Hair Nation radio DJ Tawn Mastrey at the links. I came up blank looking for a band called Joker. 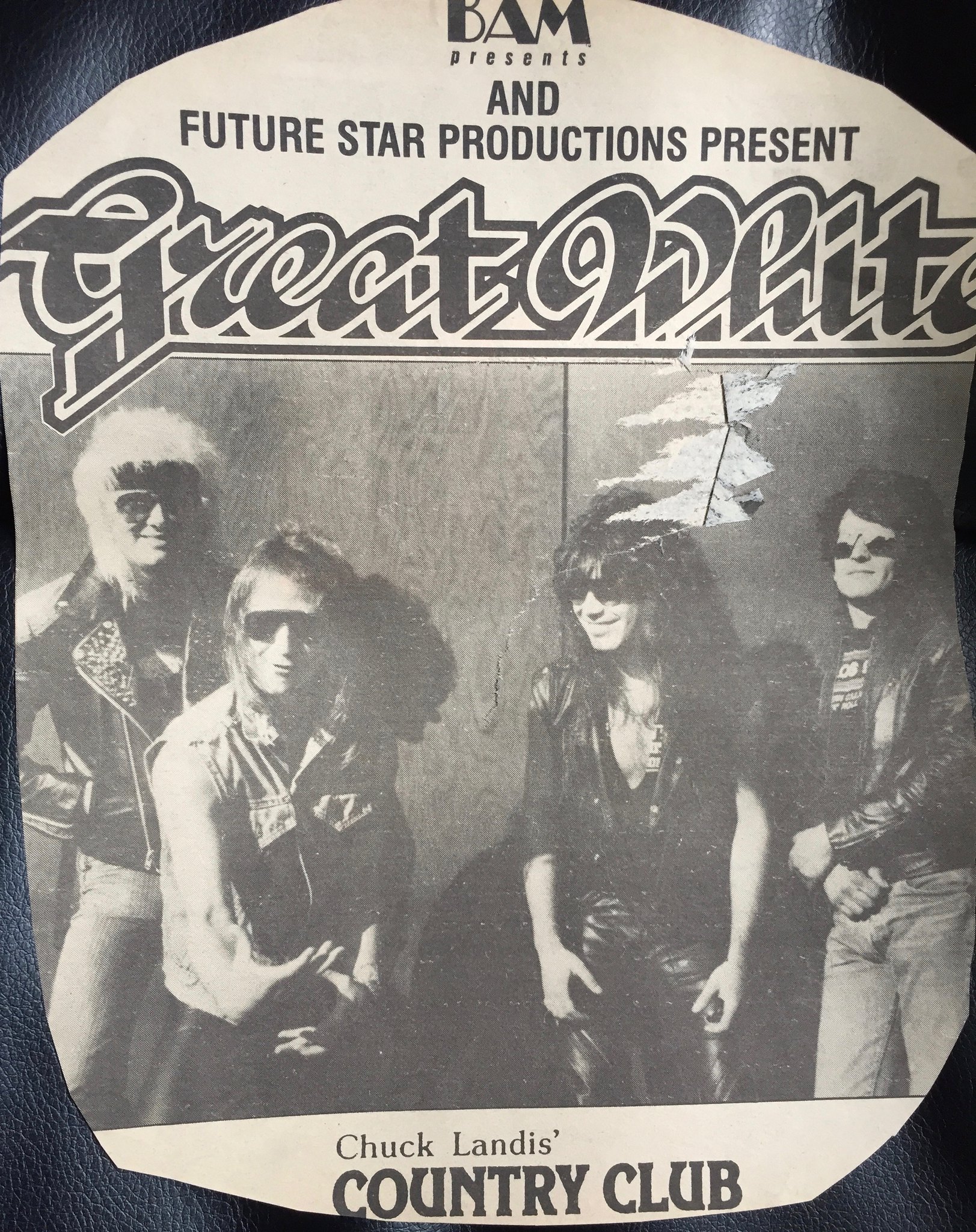 I remember we would drive all over to see Great White – my friend had a thing for Loren Black. This looks like it was taken from a magazine ad (likely BAM). The Country Club in Reseda had some great shows back in the day. 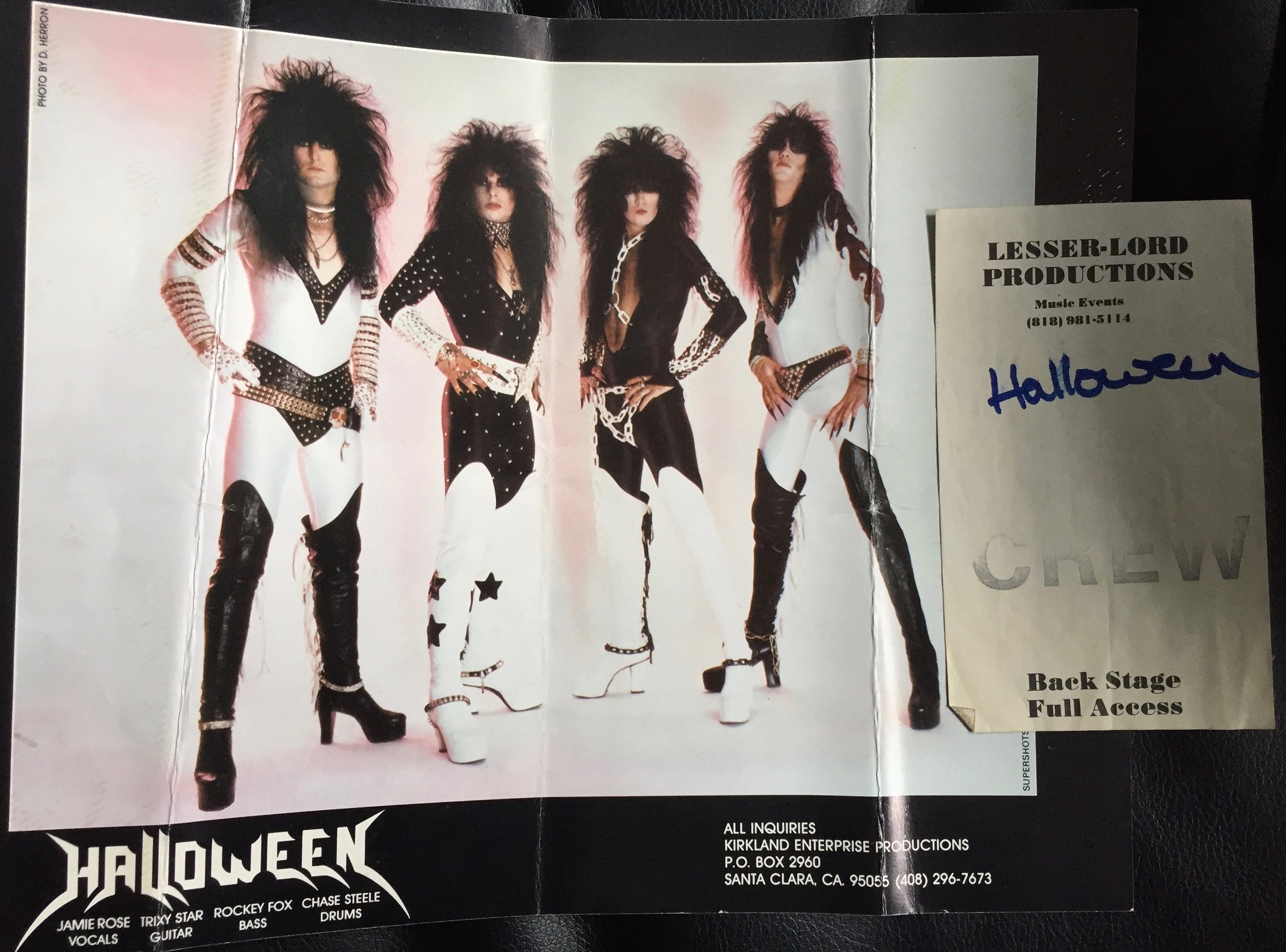 I don’t remember much about this band either, though the flyer had a crew pass stuck to the back of it (no comment) – but I want to say it involved the Rainbow‘s party-in-the-parking lot. I googled the made-up band member names and came up empty, but talk about good hair… 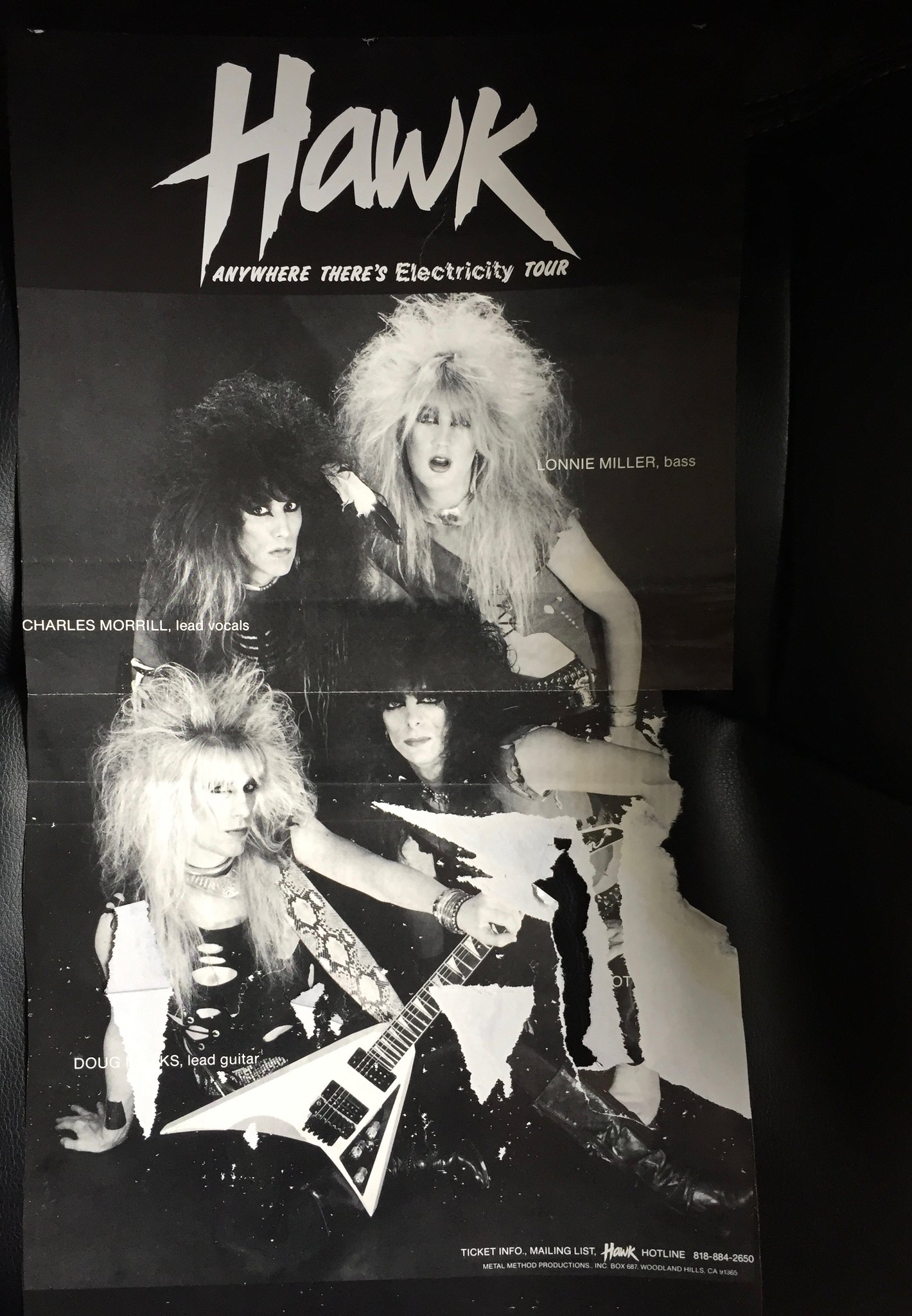 I vaguely remember Hawk. Thanks to the real band member names being included on the flyer, I just googled these guys and I’m thinking this was a great band. I learned that Lonnie Miller aka Vencent became the bass player for Bullet Boys and a great off-shoot, Lies, Deceit & Treachery (who’ve put on some amazing shows on recent Monsters of Rock Cruises). Doug Marks is the founder of the Metal Method guitar lessons, and I think this is Charles Morrill. The guy with the missing name is Scott Travis, who I learned also played in Judas Priest, Thin Lizzy, and Racer X. I wish I could remember all the great musicians I must have seen back then. I oft wonder if it will ever all come back to me, all the names and details, faces and places…but then that might be more than a tad overwhelming… 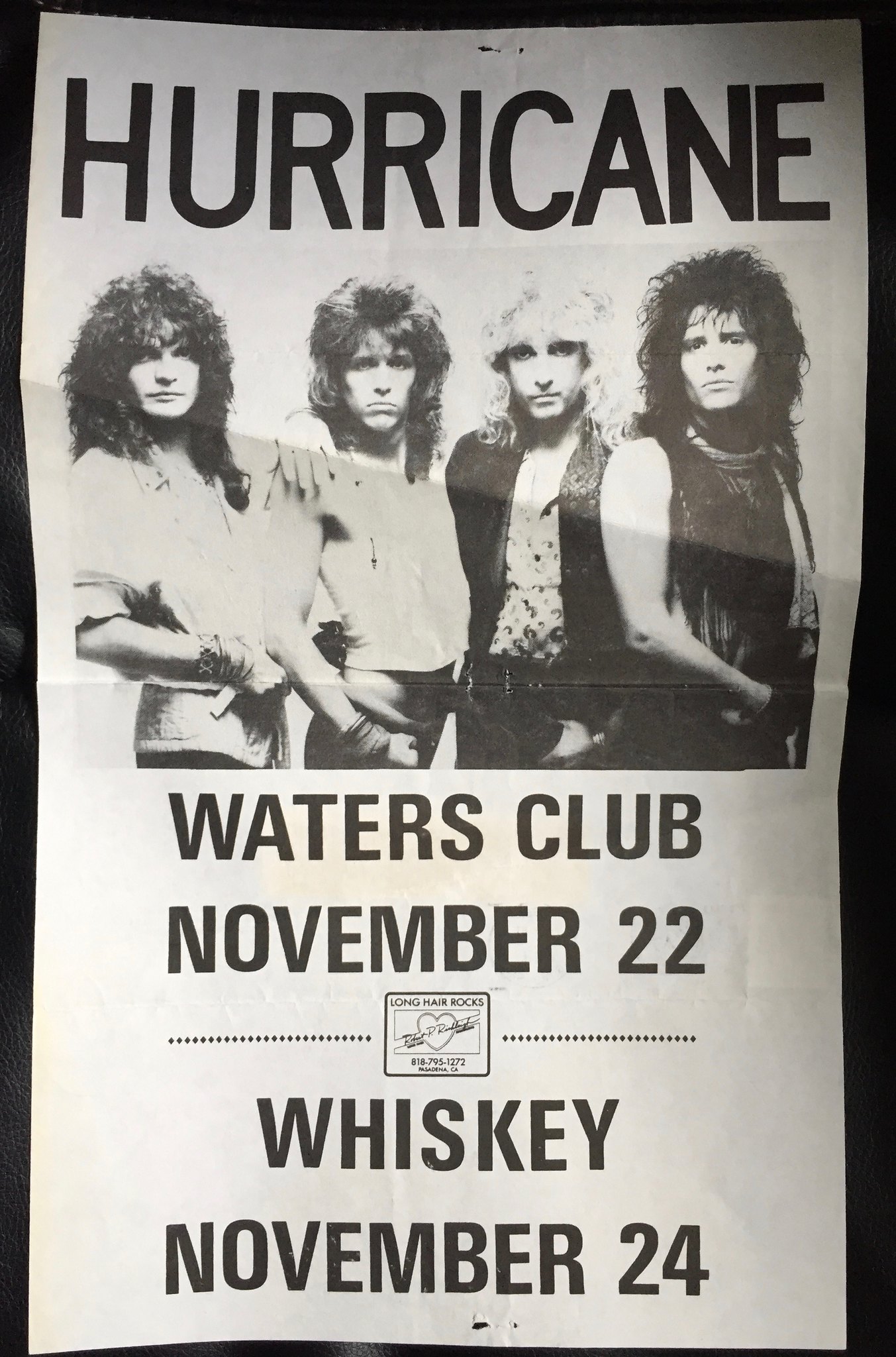 We would also travel all over the L.A. and Orange County to see Hurricane – we loved Kelly Hansen, who back then would call his fans and leave messages on when and where they were playing. We had the song “The Girls Are Out Tonight” on our answering machine…I love that long-forgotten first album to this day. Also love that Kelly Hansen is having a great career with Foreigner but it would be so cool to hear him sing some Hurricane songs again. I believe we went to the Whiskey show here. 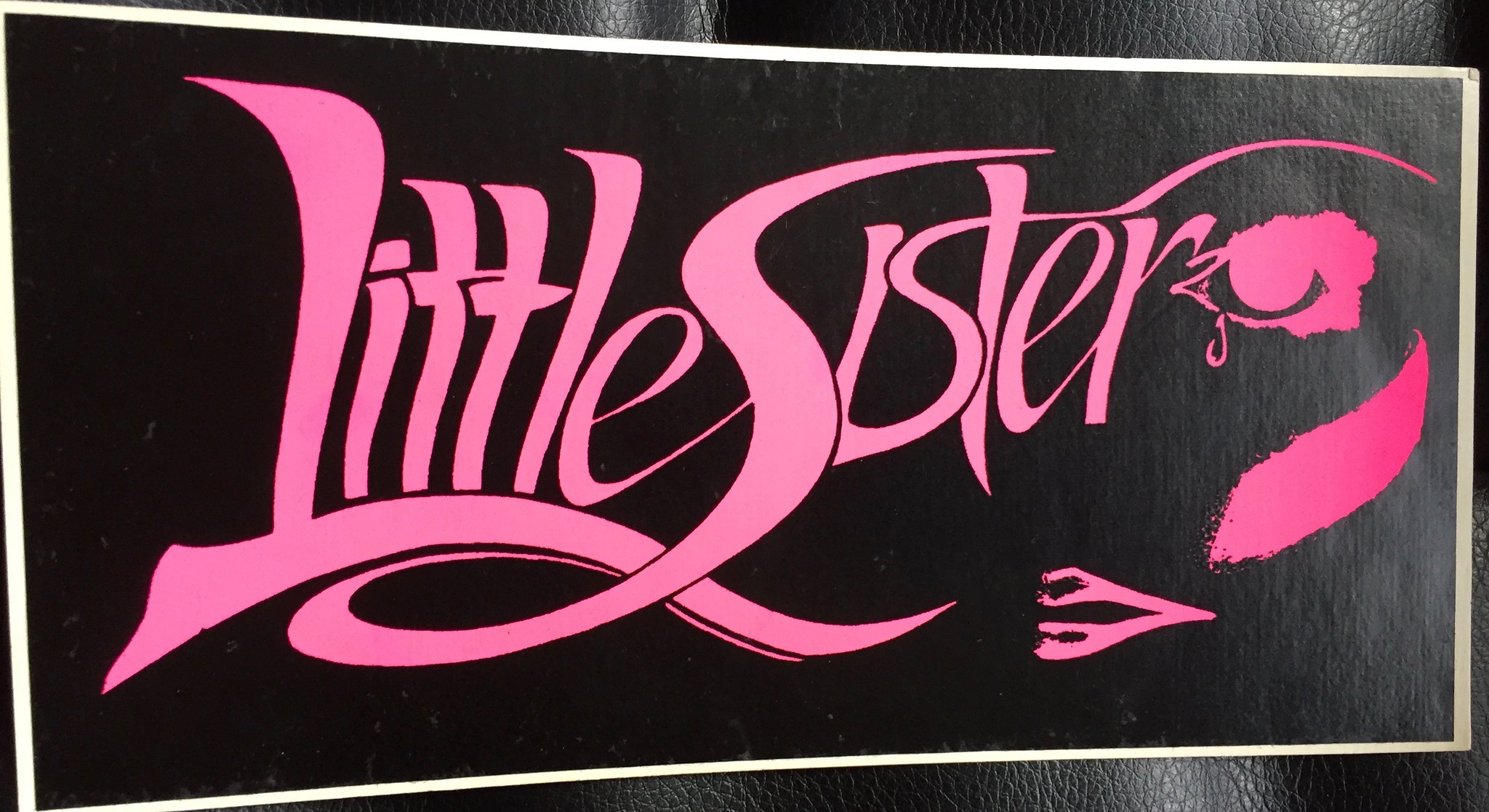 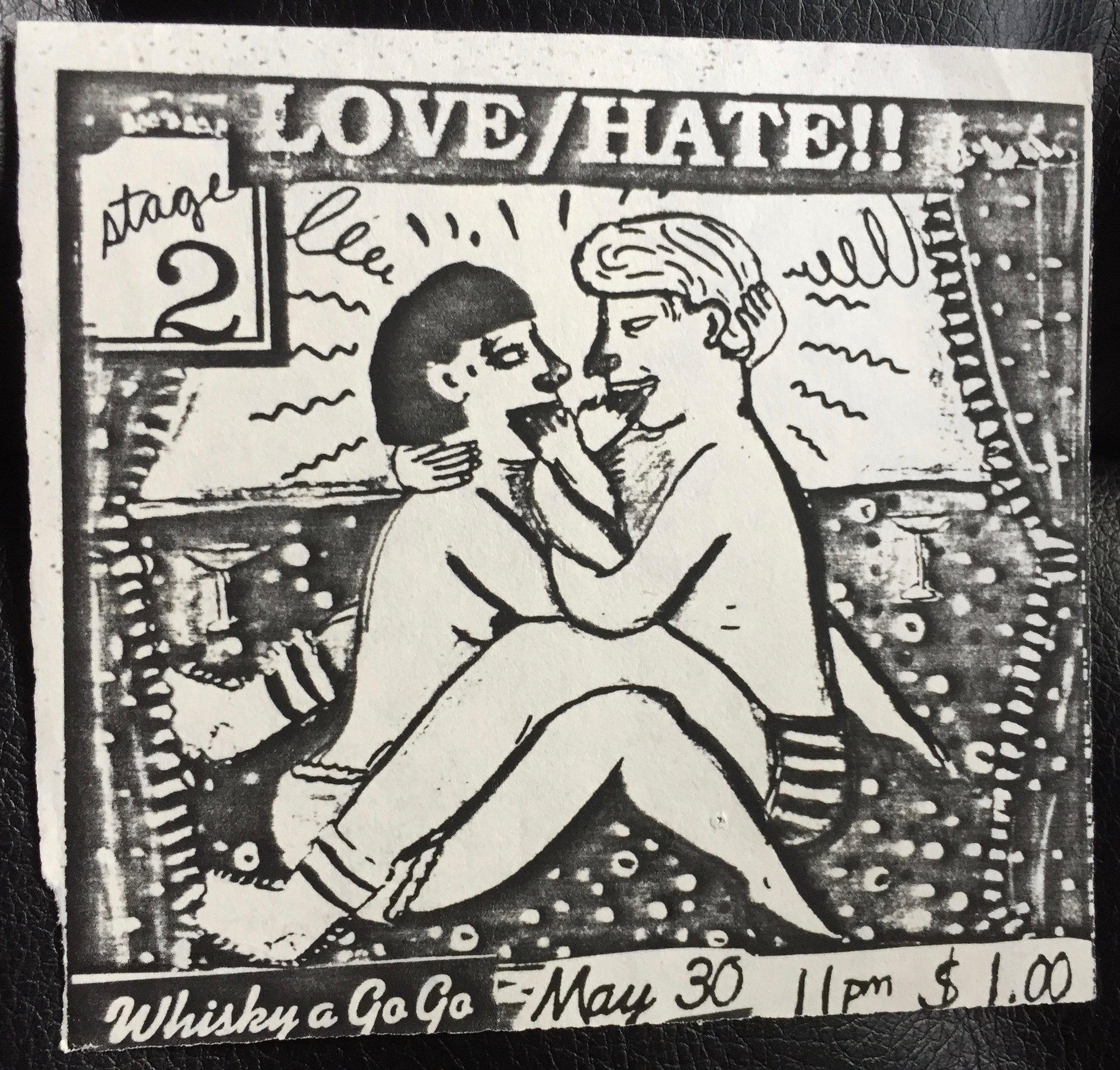 Ah, Love/Hate. My ex and I lived with Jon E. Love and his gf for awhile…that turned in to a love/hate situation if there ever was one. What a great debut album. Unfortunately they started getting attention a bit late in the decade. 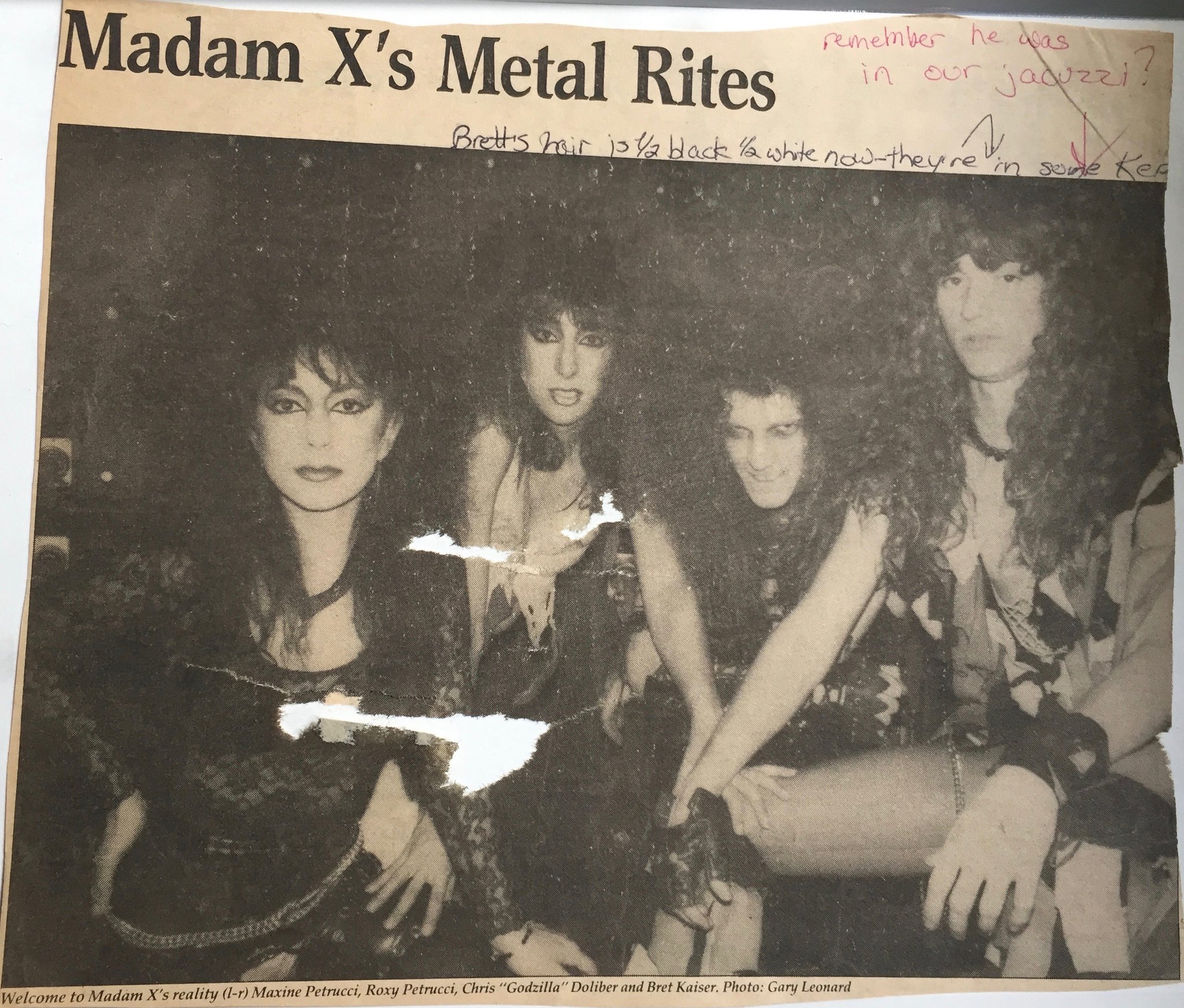 The story behind the notes on top: I left Los Angeles in late 1984 and didn’t come back until early 1986, and my friend would send me random flyers and ads with added commentary. I don’t remember sitting in the hot tub with anyone from Madam X lol. Hard to believe this original line-up is still together and was one of my favorites on the 2018 Monsters of Rock Cruise. Love them!

Nova Rex was a Florida band that went back and forth to L.A. I don’t remember ever seeing them in L.A. but I remember them from the Tampa Bay Area scene. They’re still going strong in the current ’80s festival market – to learn more, see my post Nova Rex, Nostalgia, and Neurology. 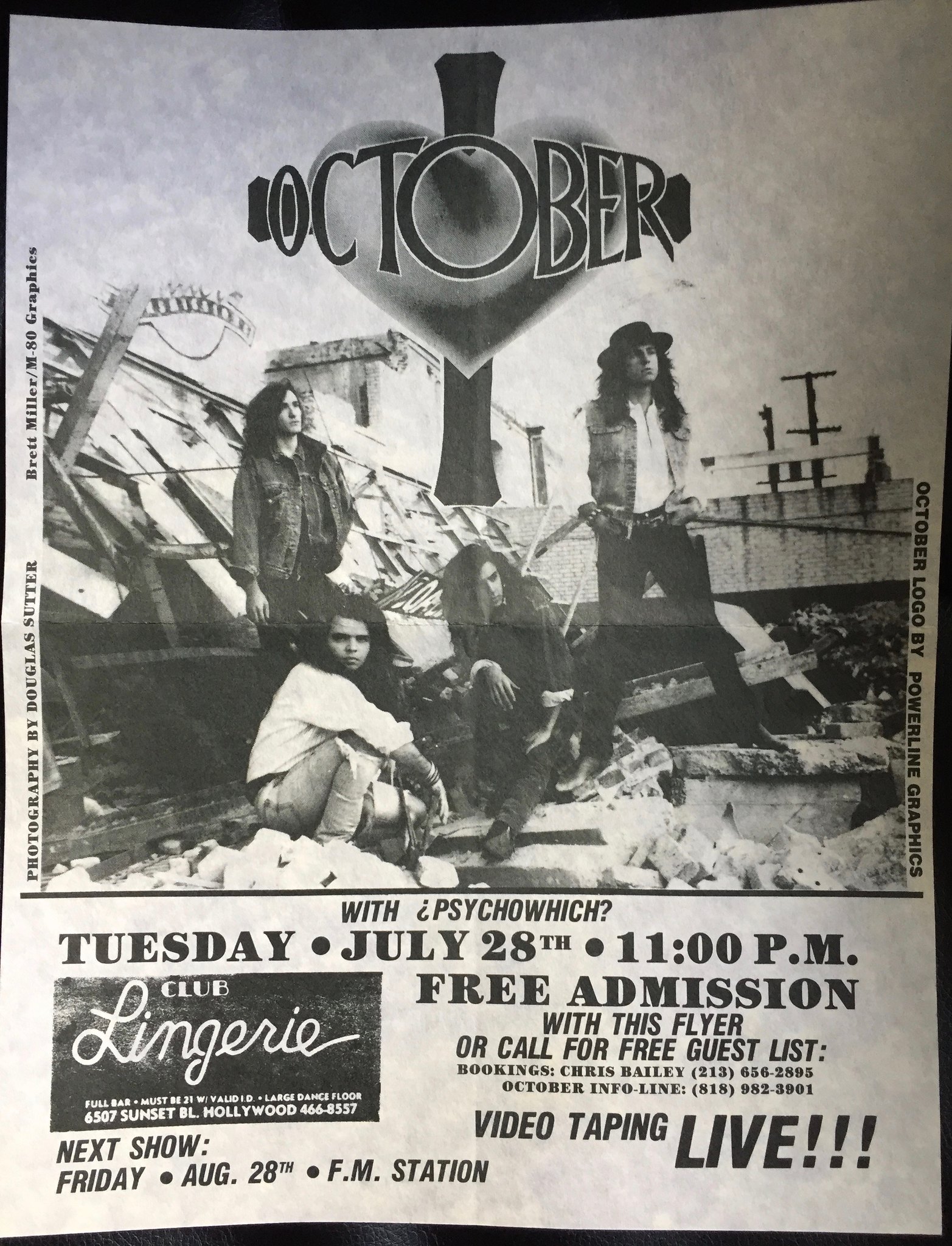 October was my friend Brett‘s band (my son’s godfather ;o)), and my bff Randee Weiss sang back-up. I don’t remember much about Club Lingerie – it was popular after I moved back to Florida so this flyer must be from the early 1990s. 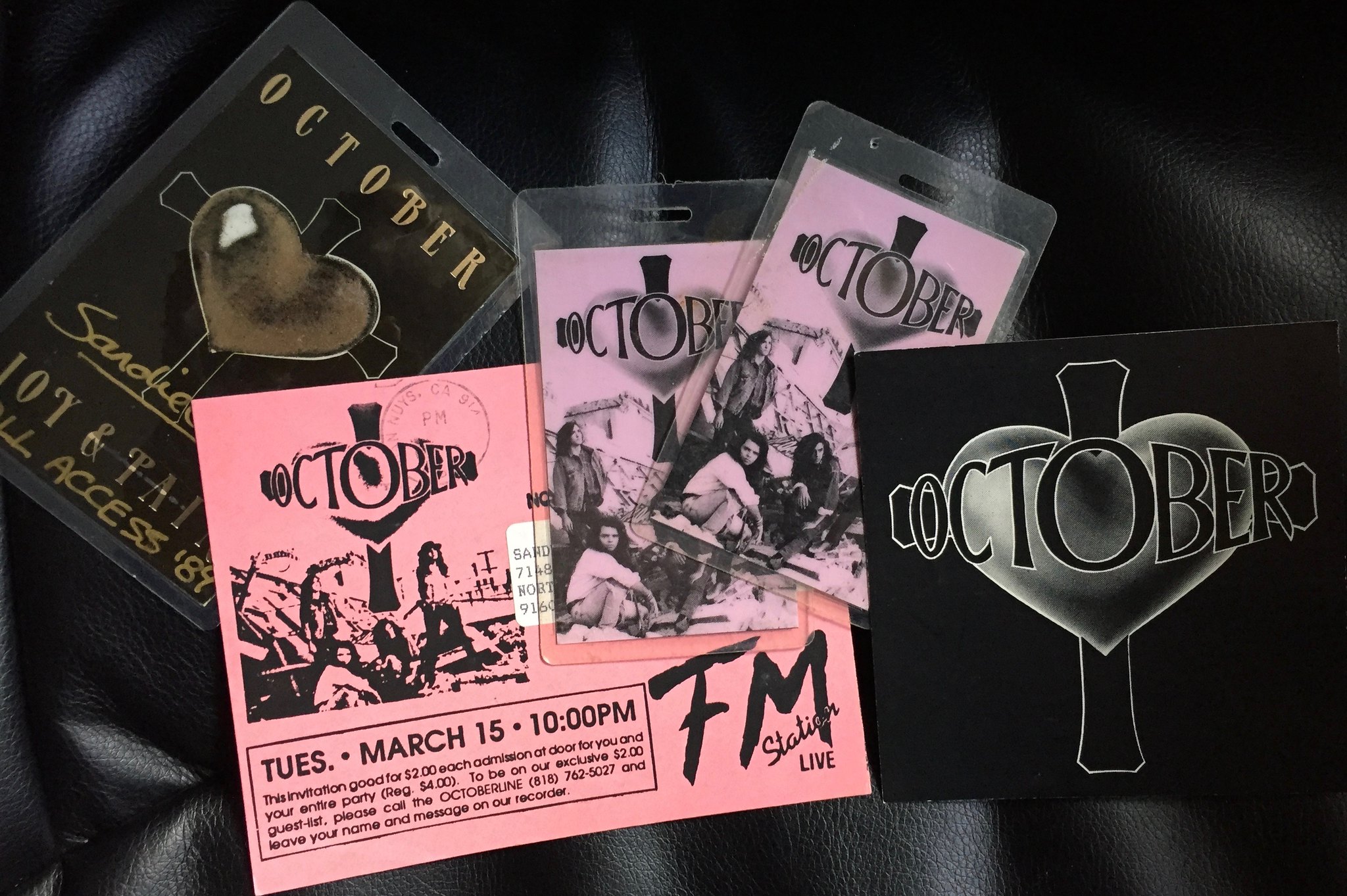 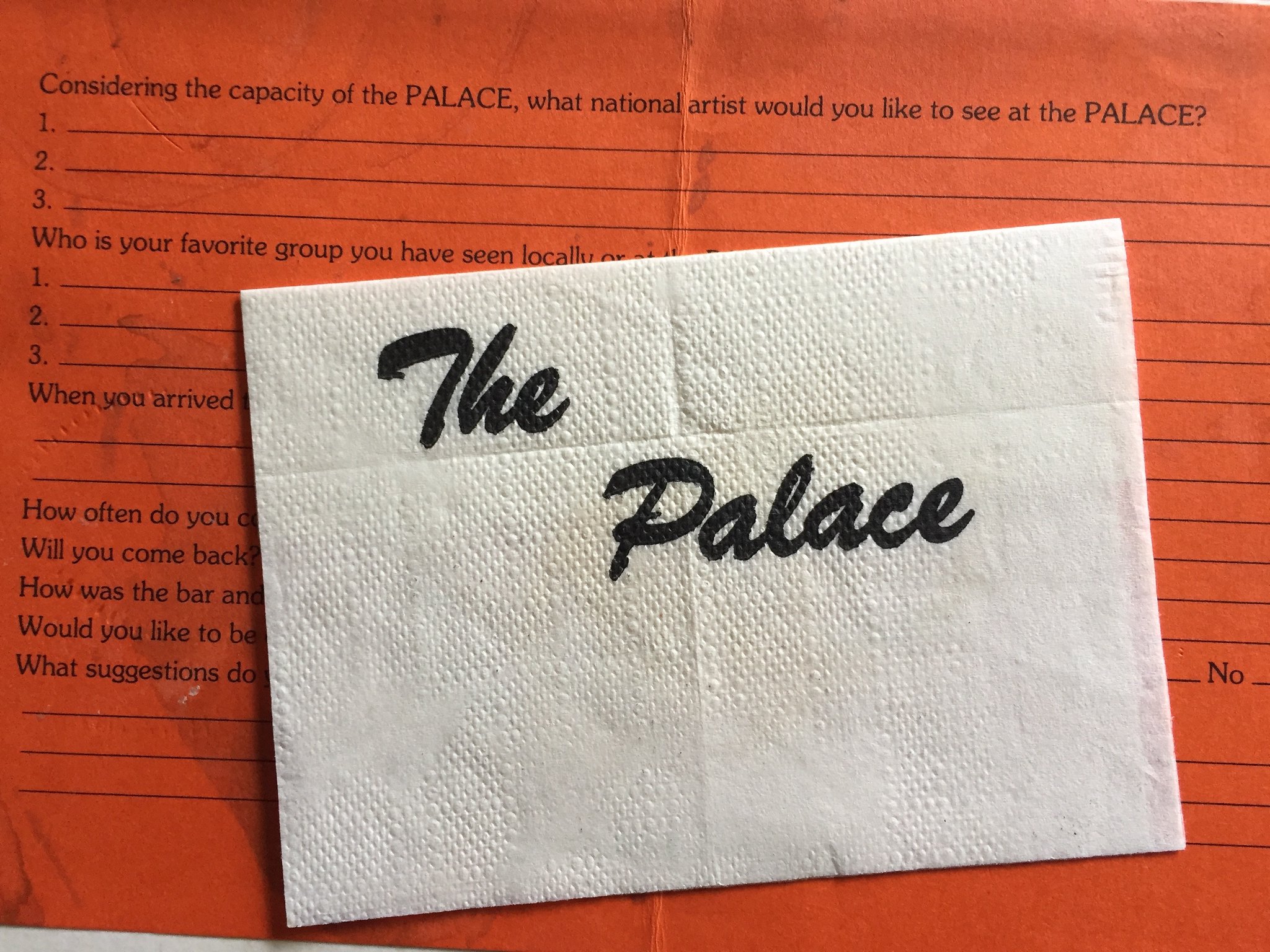 I know I saw a few cool bands at The Palace. I wish I could remember who. 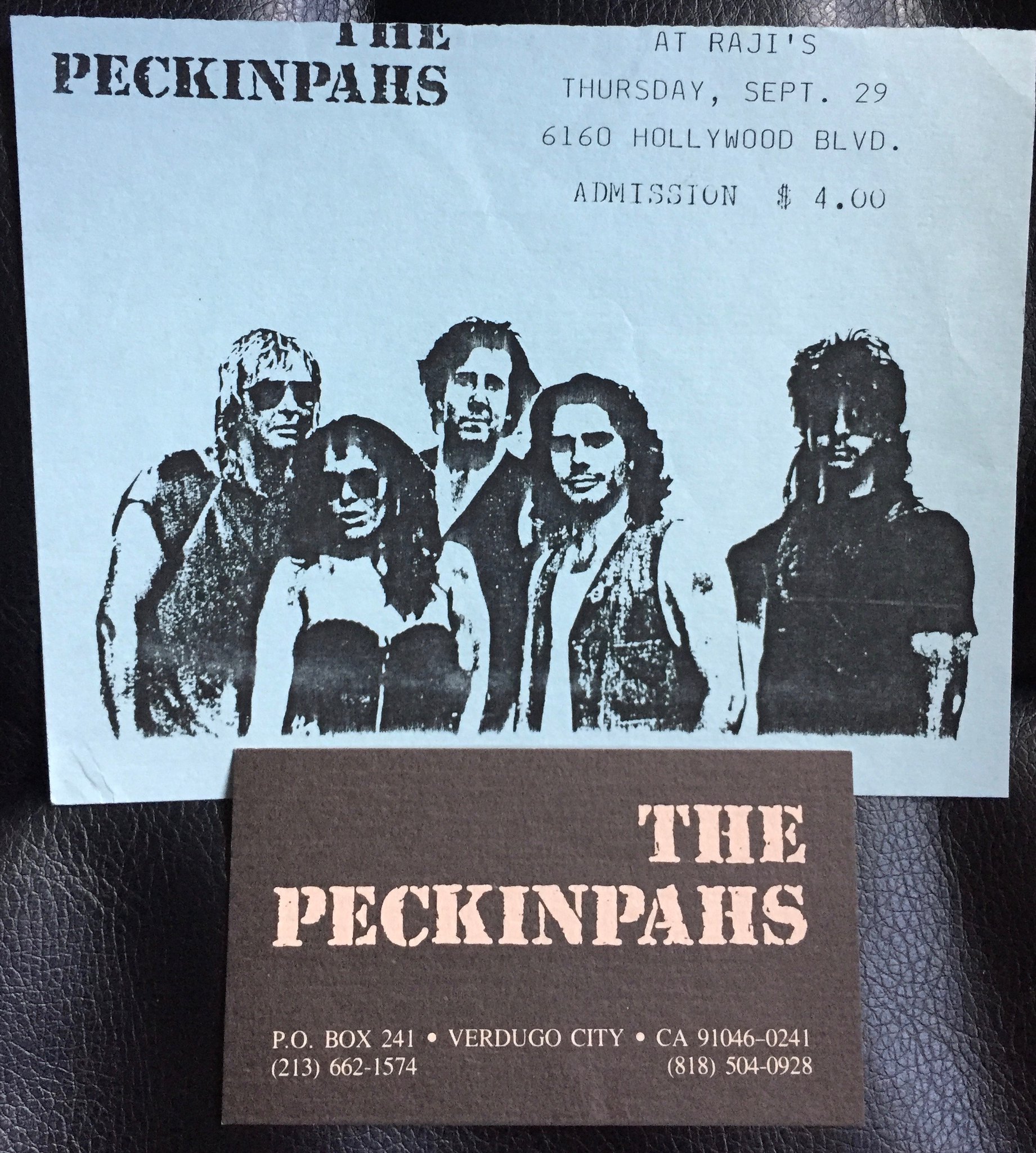 The Peckinpahs would want you know they were not a “hair band” – they played the punk scene. I met the singer when we both worked at a bank in North Hollywood…we met and became good friends after she came up to me and asked if I could see her leg-sleeved tattoos through her black pantyhose. Mind you leg tattoos (particularly on women) were not a dime-a-dozen as they are nowadays, and pantyhose were mandatory office wear back then (ugh). I remember that The Peckinpahs were voted BAM magazine’s best band of 1984 (5?). 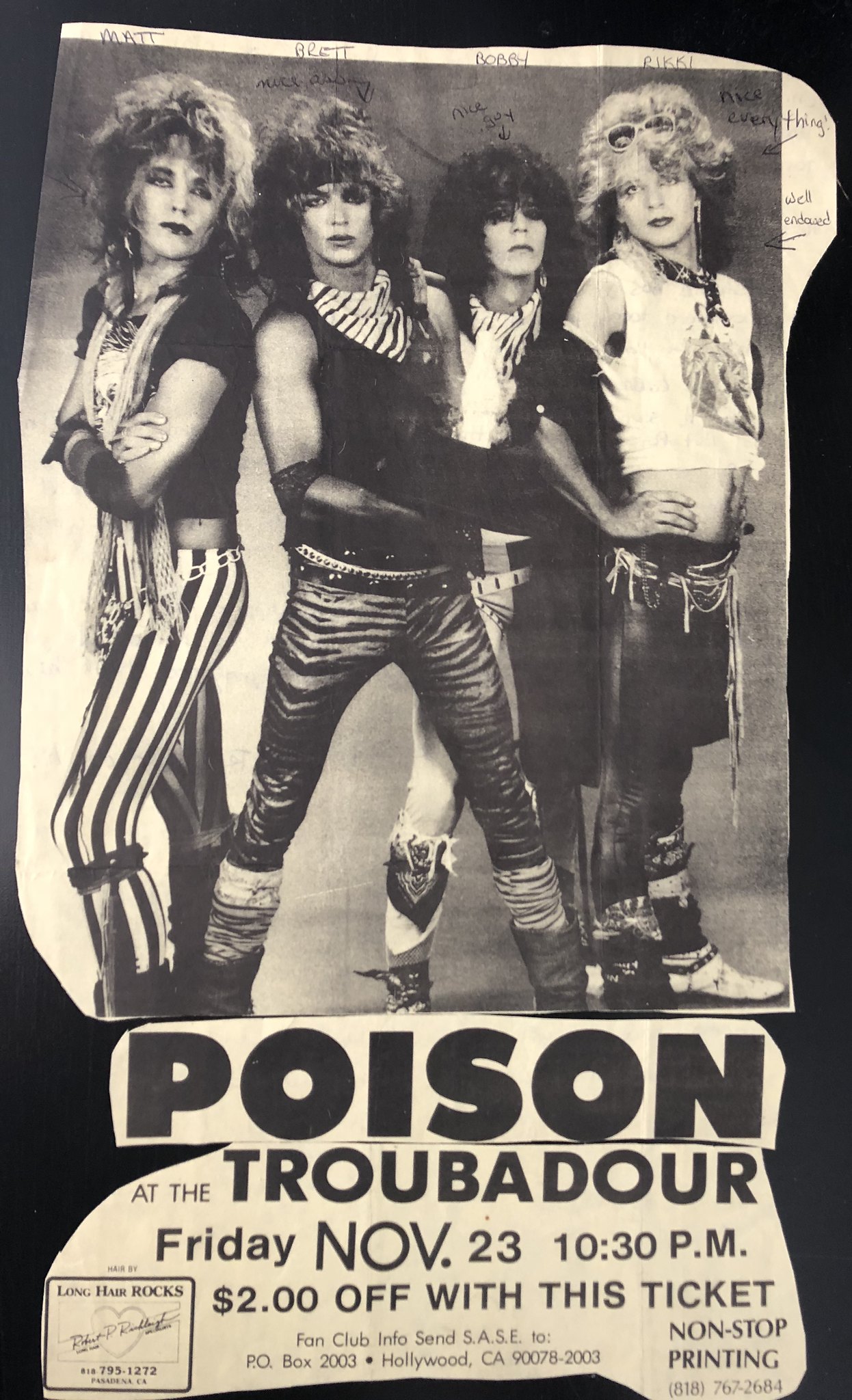 Sorry about the 1980s scrapbooking cut-up. Try not to laugh at the comments. Note the original line-up, before CC joined Posion. Anyone else remember Long Hair ROCKS in Pasadena? Robert something and his letterology thing? 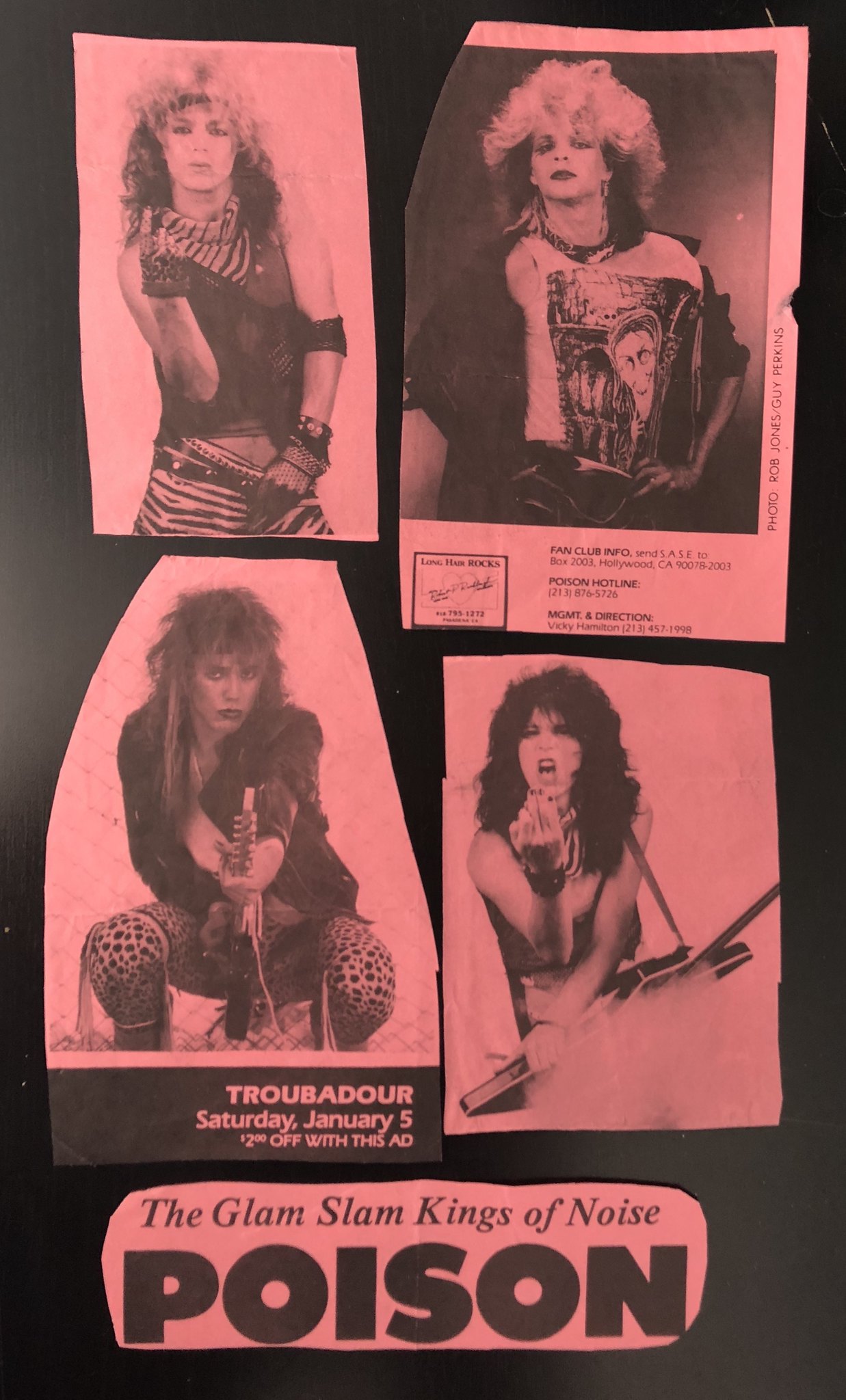 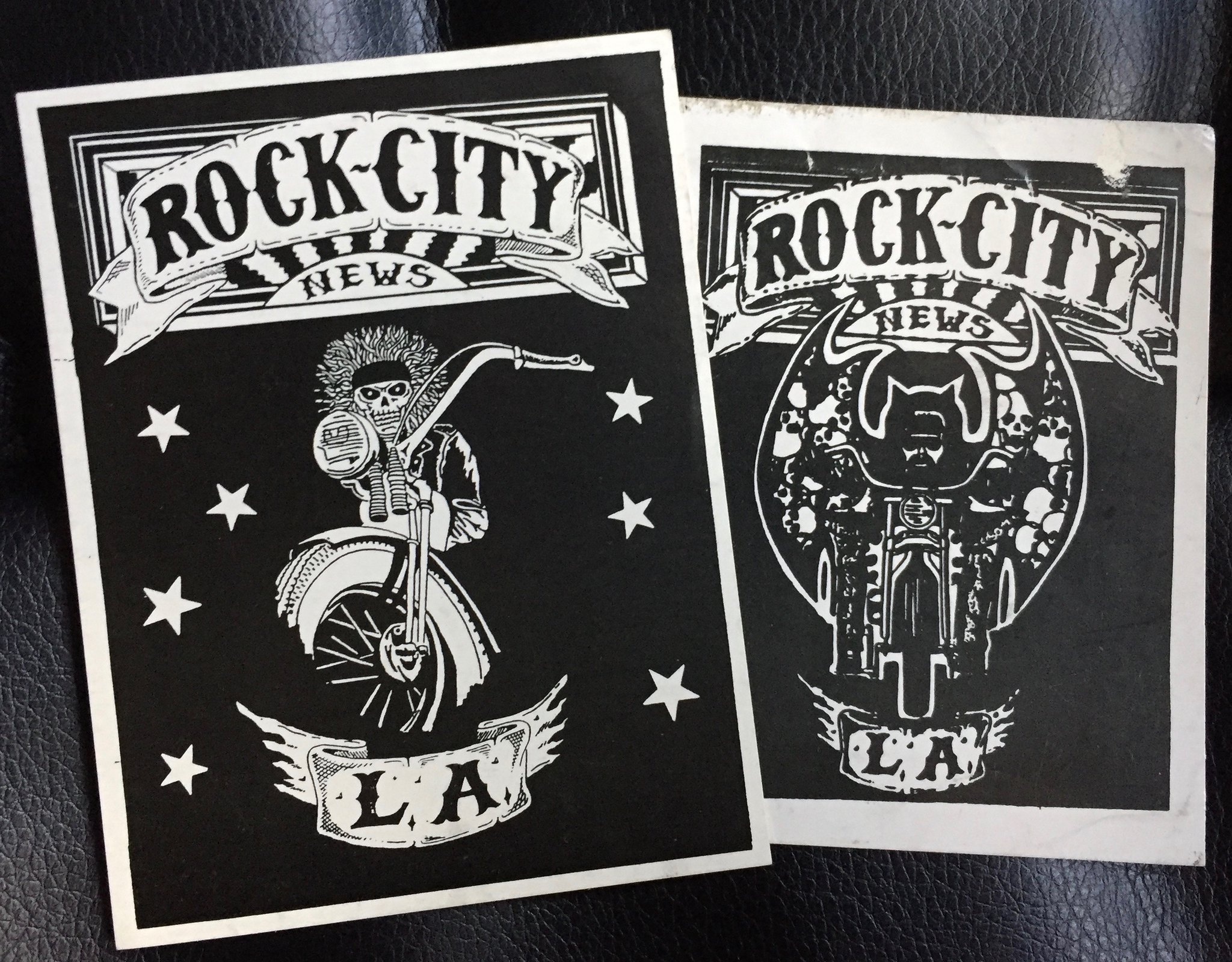 Rock City News was a nitty-gritty local music magazine, put out by Rueben Blue. My ex set them up digitally with their first Macintosh in the late ’80s. 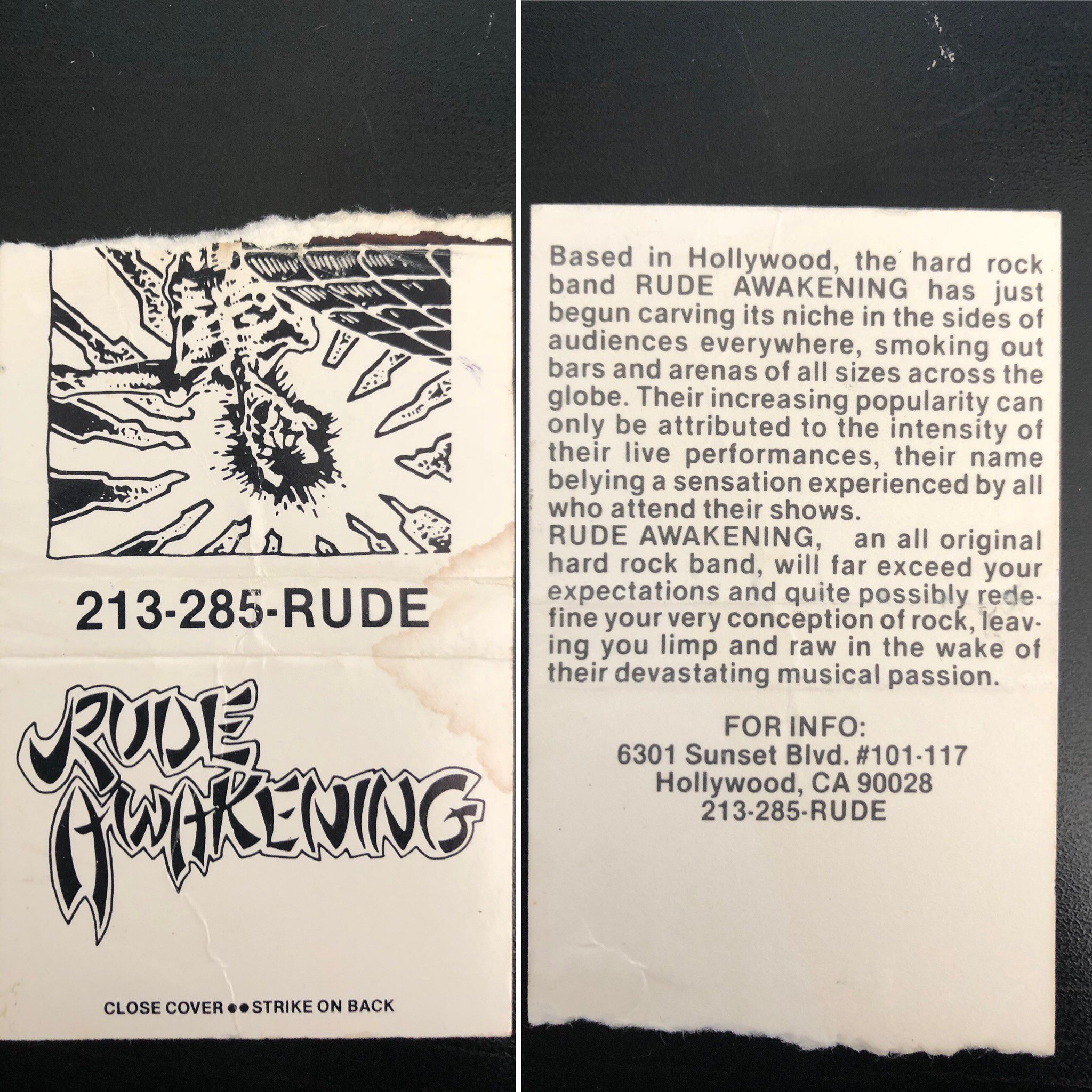 Clever marketing…but I remember nothing. There are a couple of bands called Rude Awakening on Encyclopaedia Mettalum. 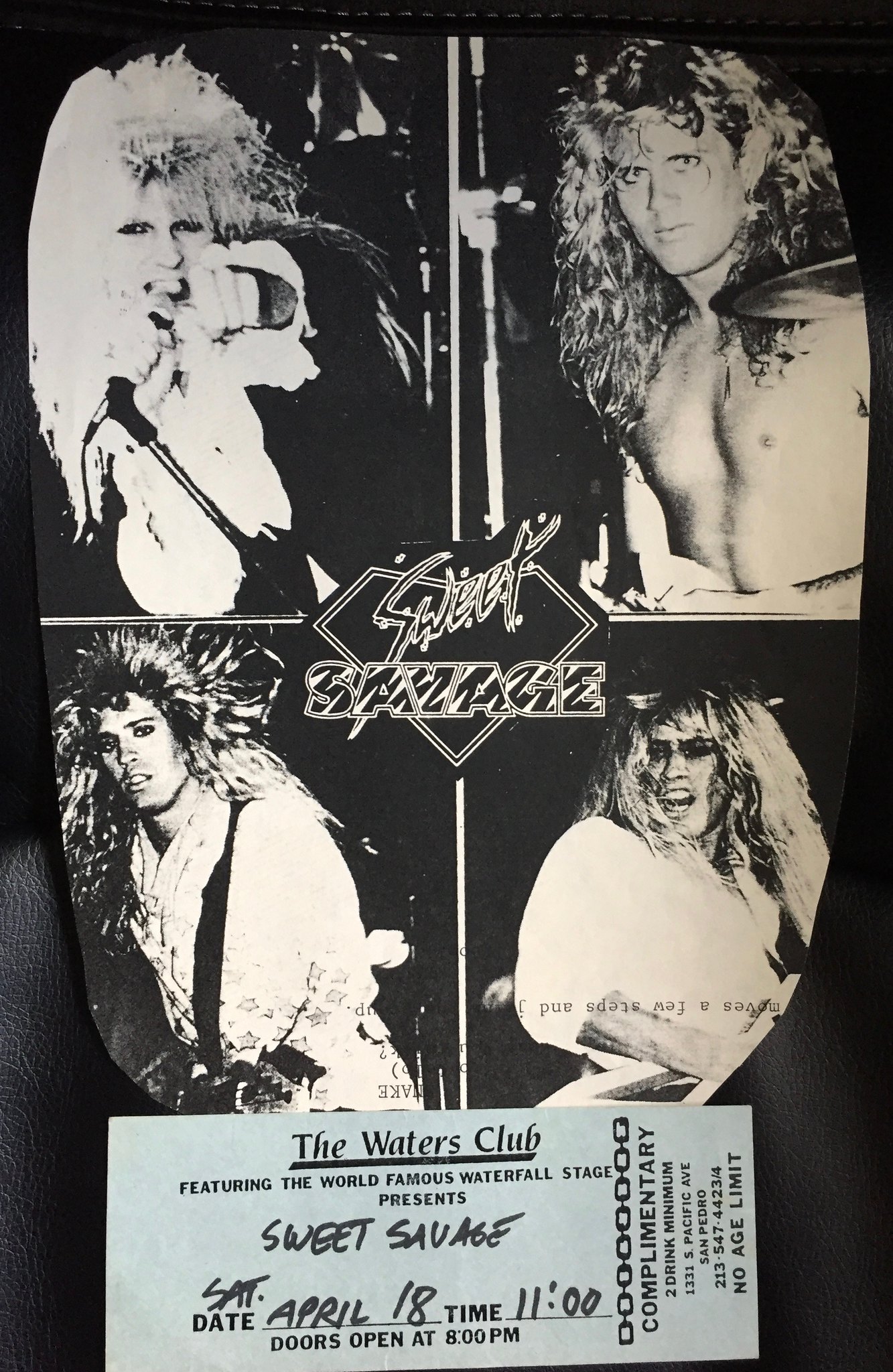 I just looked up Sweet Savage and am somewhat confused – apparently Vivian Campbell was in a band called Sweet Savage in Northern Ireland that was considered part of the new wave of British metal, and Encylcopaedia Mettalum tells us not to confuse them with the glam rock band from the U.S., although the Irish band did reform with other musicians in the mid 1980s. UPDATE: Per H’air Apparent in the comments below, this Sweet Savage is originally from Texas. I also somehow have a Sweet Savage t-shirt. 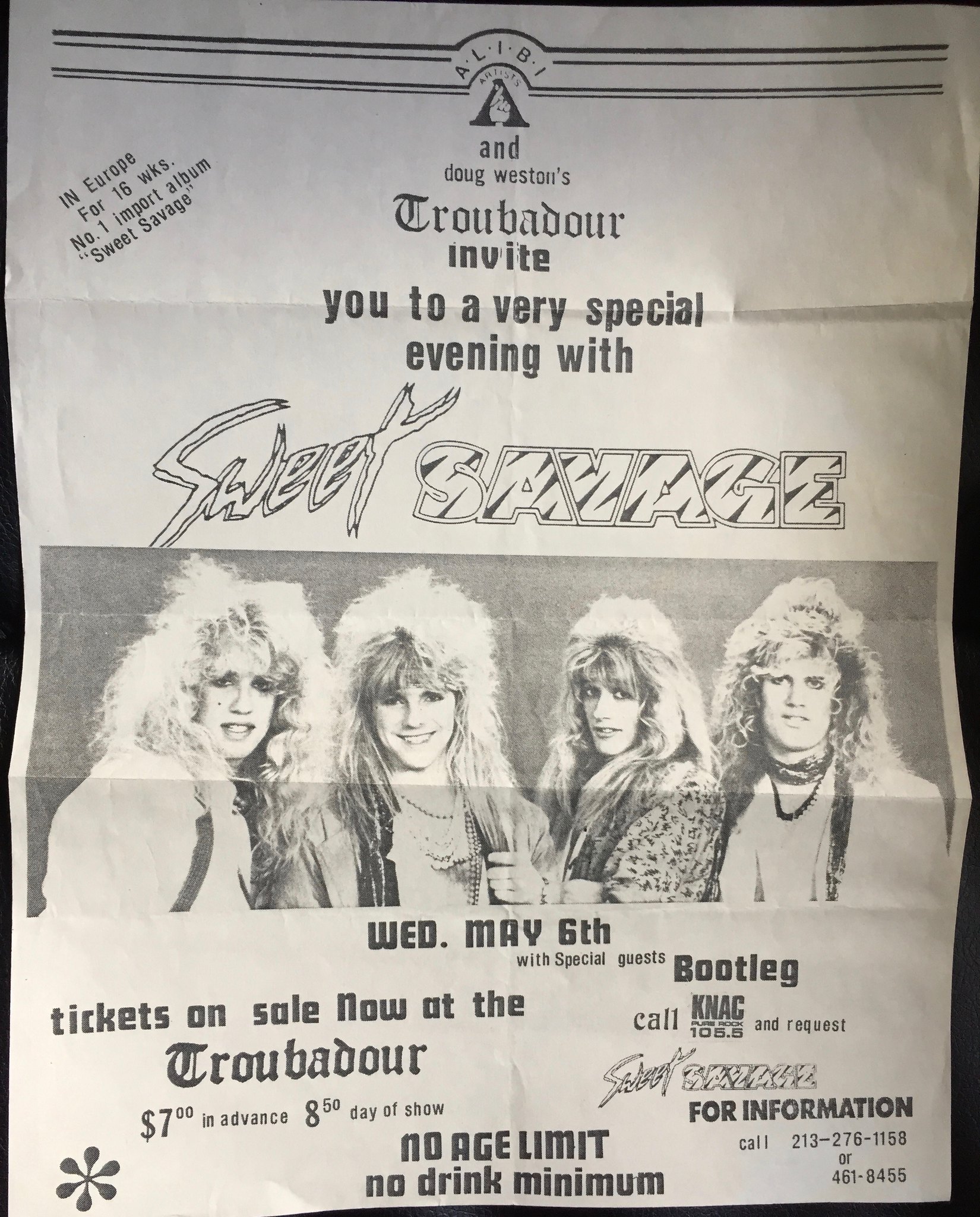 So I’ll leave this note unedited lol. The Frank of which she speaks was best known for later being the singer of The Four Horsemen. Sadly, Frank C. Star died in 1999. Note Poison, Guns-n-Roses, Leatherwolf. UPDATE: Per H’Air Apparent in the comments below, Mansfield featured Doug Aldrich and Jerry Best before they joined Lion. 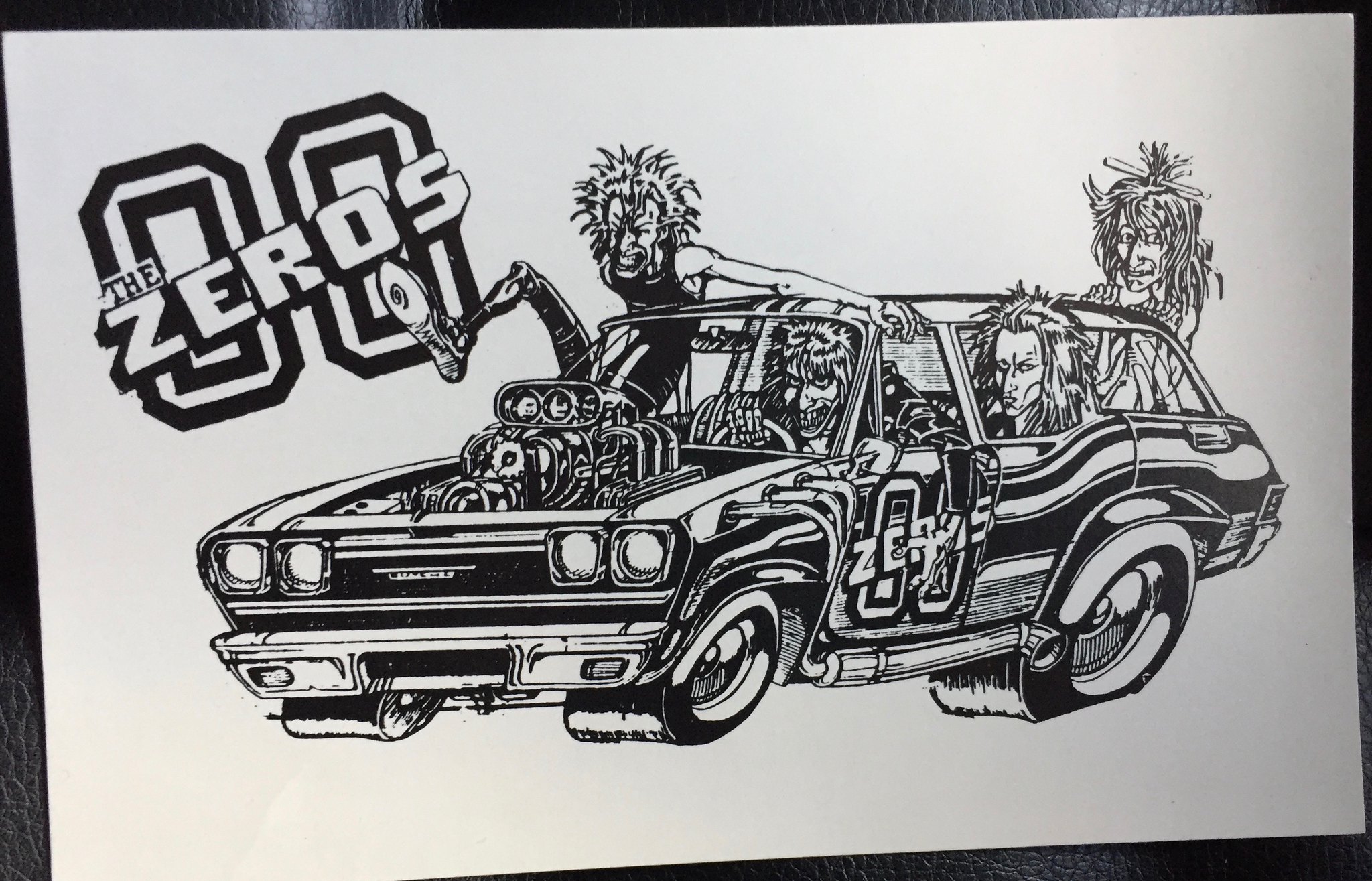 Fun band – I remember seeing The Zeros at the Whiskey. 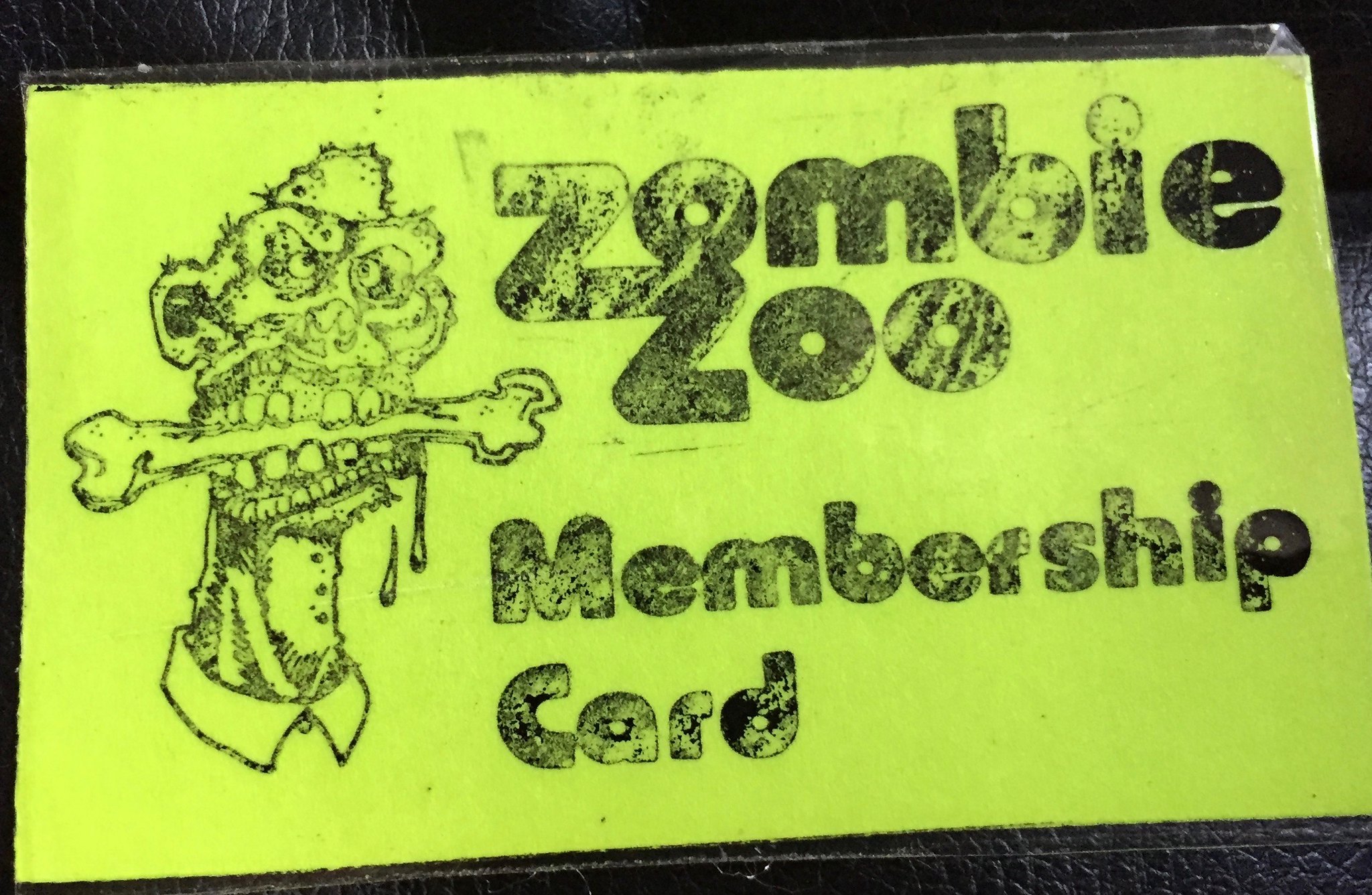 If I recall, the Zombie Zoo was another one-night-a-week bar – they popped up here and there after the success of The Cathouse. 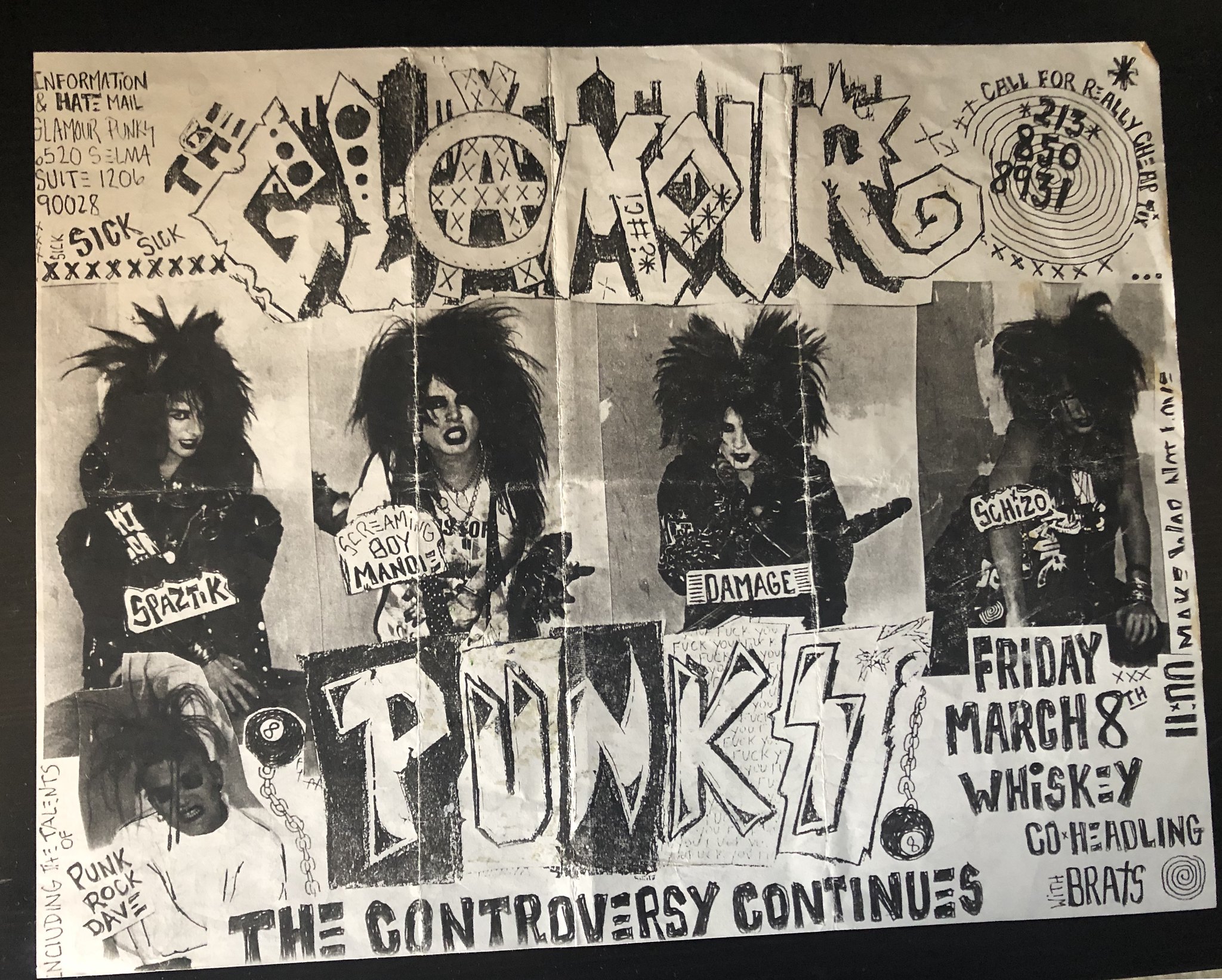 I threw this one in at the last minute as it’s not a flyer I saved but rather one that was sent to me in 1991 with a letter written on the back, and it’s just so….arty. My friend (singer of The Peckinpahs above) wrote to me and the header says: “February 7, 1991, 2:58 a.m., Rock-n-Roll Denny’s, drinking coffee.”

Somehow I still have an original KNAC bumper sticker…best radio station of the decade and genre.