The 2018 Monsters of Rock Cruise was yet another fantastic vacation in the slew of well-organized On the Blue concert cruises. I have been lucky enough to be able to seek my personal respite, reprieve, hiatus – whatever you want to call taking a breath of life as it should be once in awhile – on seven of the eight MORC cruises. It’s never been the same vacation twice, yet it’s always the same merry mix of living it up and chilling it down.

This year’s atmosphere was particularly steep in one heartening aspect, one that I’ll happily admit seems to come with aged wisdom: a permeating, profound sense of gratitude for life, music, good friends, and good times in a one-big-happy-family kind of love. The musicians emanated it over and over with both words and energy, and the appreciation flowed.

Weather-wise, it was mostly sunny and pleasant. However, this year was also rather windy in a lovely sort of way; I personally enjoy the rocking (no pun intended) atmosphere. In fact, I sit here at my desk the day after disembarking and still feel like I’m rocking – an odd sensation yet a pleasing reminder.

Royal Caribbean/Navigator of the Seas-wise, there was an impressively nice and helpful staff, from the porters to food and bar to crew and everyone in between. Food and drink-wise, it was typical and somewhat neutral cruise fare (give me a salad bar and I can eat anywhere, although I did indulge in nacho cheese covered chips and Johnny Rockets). Our level seven balcony room was awesome – I got my coffee delivered for sunrise patio sipping every morning, and followed it up with ocean-breezy yoga to kick off the day.

Time-wise, I loved the extra fifth night this year – it seemed to provide for a little more downtime in between shows. The four-nighters of the past always left me wishing for a little bit more. Also, by the time I woke up on Day Six, home was sounding pretty good. I also loved the Sunday-Friday cruise schedule, with the weekend to do some serious recuperating before going back to the grind.

Pool Stage – The biggest difference this year was the pool stage; unlike previous main stages, it was a more intimate set-up. It worked well for band Q&As and lesser-attended shows, though there were plenty of roomy upper-decks for watching when it got crowded. It ended up working out quite well as it would have been too windy for the big shows, and I can understand the need to be prepared for rain. But how I cherish those seaside pool stage shows of years past ;o).

Studio B – My favorite venue by far. I heard someone in the elevator say that Studio B was meant to be the “pool stage” of past years and it was the perfect description. A big stage with a big general admission area – there really wasn’t a bad spot in the place. The sound was great. A bartender told us it was an ice skating rink on “regular” cruises.

Metropolis Theatre – Generally like past theaters…roomy, easily accessible, easy to see from everywhere, great sound. Of course mainly a sit-down theatre, though there was room to stand and jam out when the feeling stuck. I mean, how can you SIT during a Kix show? But even I like to sit sometimes, rare though it may be.

Star Lounge – This bar became known as the place where you could hear but not see. There has been a setting like this on every cruise, more lounge-y bar than concert venue due to the floor-level stage that blocks the band to everyone who isn’t standing up front. But it was a decent place to go in and find a seat and socialize and listen. Most of the bands that played here also played a second show in Studio B.

Boleros – Another cruise standard: a small, intimate stage in a main hall bar area. It’s always a cheery bonus to stop and see whoever is playing these shows as you wander around the ship. This year’s star Boleros stage presence was Heavy Mellow, which plays hard rock and metal standards on spanish guitars.

Two Poets Pub and Viking Crown – I didn’t end up at either of these venues, although I saw it flowing at the gills for Heavy Mellow, and when Eddie Trunk hosted his live show on SiriusXM every afternoon. Viking Crown featured Brian & Izzy’s Late Night Karaoke, Cooking for Rockstars, Dave Rude’s Guitar Clinic, photo experiences, a cocktail contest, an auction, and, apparently, edible tattoos on Valentine’s Day.

People always ask. It’s hard to say when there were so many enjoyable shows, but best-in-show to me was Lies, Deceit & Treachery, with L.A. Guns coming in at a close second, and Madam X in the top mix somewhere. LD&T is made up of the original Bullet Boys band, including my favorite-drummer-to-watch Jimmy D’Anda, and singer Andrew Freeman, whose vocals I lovelovelove singing Ronnie James Dio songs in Last in Line. Only on the MOR Cruise can you see a kickass concert at 11 a.m.

MORC hosted pre-shows on Friday and Saturday night before Sunday’s departure. I only made the Saturday night show; once again, I simply couldn’t add a party night on the front-end of the trip. We arrived at Magic City Casino right as Y&T started and it was a gorgeous Florida winter evening in a spacious outdoor venue. The sound was fantastic yet oh-so-loud. Yes, I know, if it’s too loud you’re too old, and yes, I suppose I’m old but I have enough hearing problems so I never went anywhere without my high-end ear plugs strung about my neck (side note: I’m still open to finding the absolute best concert ear plugs if anyone has any suggestions).

As usual, Y&T put on a first-class show. And I think I love Queensryche now more than ever…I love to hear them play nowadays, the songs sound so good and the energy is so complete. And I’d like to thank that guy, whoever he is, that left the Rage for Order cassette in my car back in 1986 because that’s how I got into this band.

I often wonder what average cruise patrons and port employees think when the several thousand long-haired, tattooed, skull-wearing, cleavage-bearing, black-clad assortment of young and old rockers congregate at the port, all happy to be amongst Their People. I imagine they wish they were going to have as much fun as we were about to. 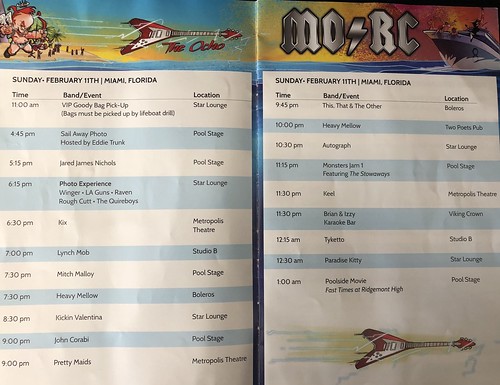 Here’s a video of Lynch Mob in Studio B. I wondered who would be singing given the recent depressing departure of Oni Logan from the band. Like I said in my review of last year’s Lynch Mob show, these guys had just got their band chemistry to a really good place. They ended up bringing back old vocalist Robert Mason, who now sings for Warrant. According to Blabbermouth.com, Robert will be doing a few shows with Lynch Mob, but they’re not trying to steal him away from Warrant. George Lynch and Sean McNabb were great, and were very visible, friendly faces around the ship. My favorite drummer boy Jimmy D’Anda was replaced by Scot Coogan, presumably because Jimmy has reunited with his Bullet Boys bandmates in Lies, Deceit & Treachery.

The day started out with an always-enjoyable John Corabi jam on the pool stage, and from there we tendered over to the scenic port of CoCoCay, Bahamas. The ship was originally scheduled to stop in Falmouth, Jamaica, but due to some sad civil unrest in that country it was moved. We sat in the island sunshine with frothy cocktails, had lunch, and checked out a bit of acoustic Budderside.

Headed back and watched Raven (who I did not know), then on to Madam X, Rhino Bucket, Winger, Tesla, Junkyard, Lita Ford, and Doro. What a day – and then Queensryche, Y&T, Faster Pussycat, the Iron Maidens (female tribute band), and Rough Cutt all played late shows that even a triple-shot of espresso couldn’t fully support. 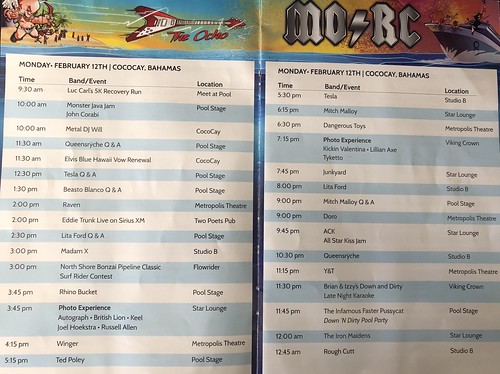 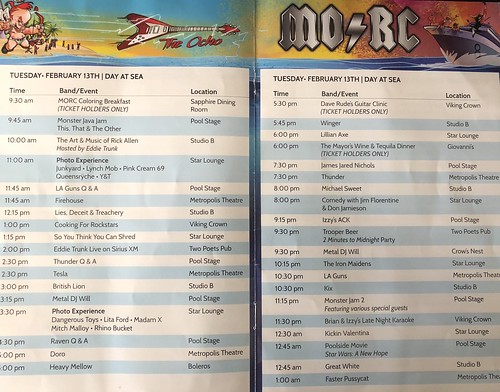 This video is of the first song by Lies, Deceit & Treachery which set the tone for the whole kickass show. We spoke with Jimmy D’Anda for a few minutes in the cafeteria later and he was so appreciative and thankful of our praise, and said the band felt the chemistry too. Seems like a cool guy. I hope they tour.

Wednesday was a beautiful yet sometimes windy day in Labadee, Haiti. We braved (literally) the local shops and got a few trinkets to support the local economy, watched Jason Beiler do an acoustic set, then enjoyed Atomic Punks (Van Halen tribute band). Back on the ship we saw an amazing Vixen show with a variety of guest singers as Janet Gardner was recovering from emergency surgery after suffering from a blood clot on the brain. Checked out The Quireboys (forgot how much I liked their bluesy songs), Pink Cream 69, another great Tyketto show, second-in-show pick L.A. Guns, and then a bit of Beasto Blanco. 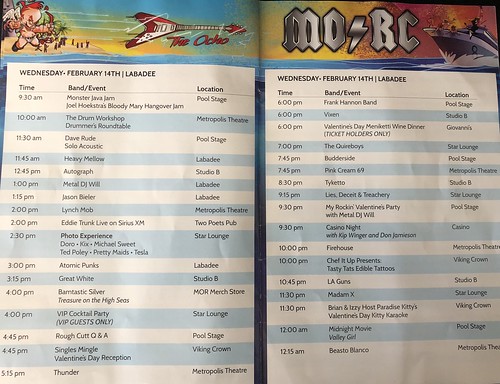 Here’s a video of Todd LaTorre from Queensryche singing Edge of  Broken Heart with Vixen (whose singer, as mentioned, is recovering from brain surgery) and a humorous twist featuring all the fill-in singers at the end…loved the love at this show.

A short clip of “our song” as he called it – Tyketto’s Forever Young. RIP, Brittany.

Last day! After a morning cruise breakfast of a lox and cream cheese bagel, I went to Vixen’s Share Ross’ essential oils seminar in Studio B, where I passed essential oil samples to a fit and healthy looking Taime Downe and his beautiful girlfriend – the seminar was a very cool gem in the whole cruise experience. I’ll just add, for posterity’s sake, that one of the things I do remember from the ’80s is that Taime always went out of his way to go around and introduce himself to people – like at the Rainbow party in the parking lot – and, quite honestly, was the most gracious and pleasant rockstar on the Sunset Strip. Just sayin’.

We then checked out “It Came From the Studio” Roundtable with Micheal Wagener (producer), George Lynch, Kip Winger and Mark Weiss (rock photographer) on the pool stage – hosted by Eddie Trunk. There were some good questions and interesting stories. From there we saw Micheal Sweet of Stryper do an acoustic set with guests, took an unexpected nap on a pool lounge chair, then Rough Cutt, a band I was really looking forward to. Finished off the evening with a great Junkyard show and finally Atomic Punks on the pool stage. 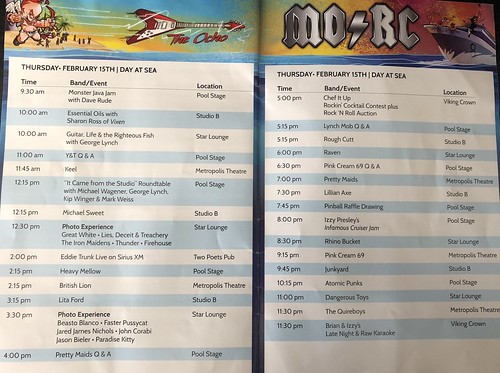 Sorry this Rough Cutt video is so short and rocky – I’m dancing around and I hate to take videos at shows and my video guy Grant left for Atomic Punks. His intro to Bad Reputation mentioned that it was about Rainbow girls…I got no problems admitting that was me and my pals – good times, good times ;o)

Final show of the cruise – Atomic Punks on the Pool Stage on a beautiful Caribbean night.

Tired but happy, we had put our bags out the night before and leisurely made our way off the ship around 9 a.m., and then experienced an insanely thrilling taxi ride in and out of emergency lanes with brake-slamming jerks back into traffic, stopping just short of jumping dirt piles (even though I think the driver considered it once), to the Miami airport. I’ll also mention that I’m glad I wore my new Queensryche shirt home on the plane because singer Todd LaTorre was on our flight and was nice to chat with, so that was cool. All in all, another great cruise and amazing vacation. Life is good. 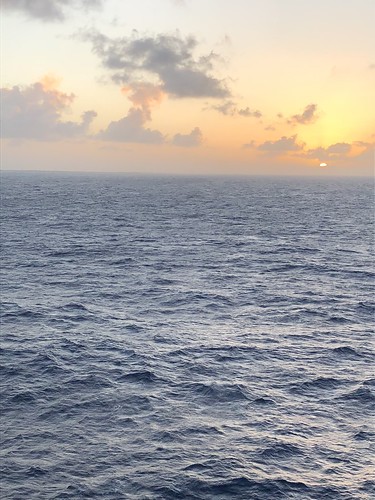 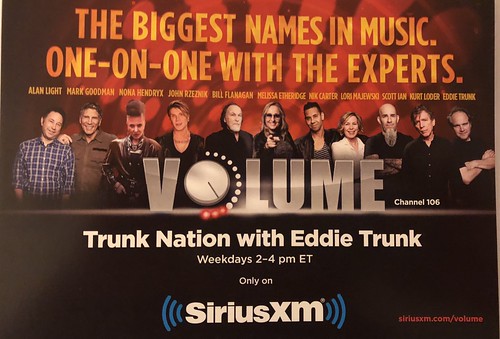 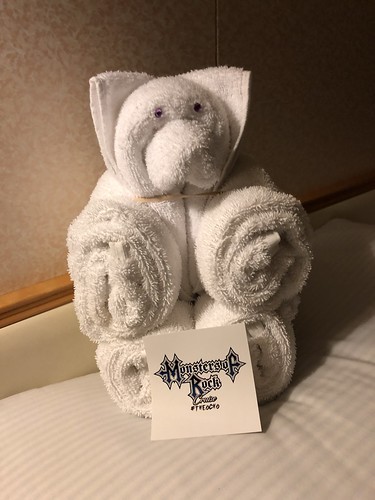 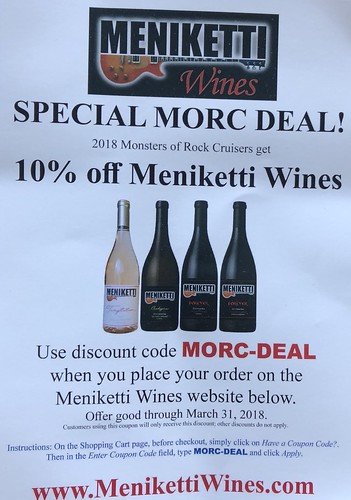 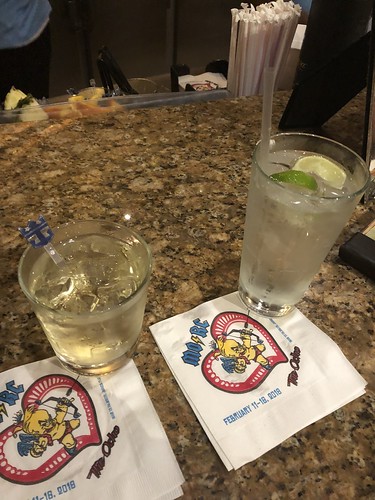 One thought on “2018 Monsters of Rock Cruise Recap”