For band flyers from this era, check out my post 1984-1989 Los Angeles Sunset Strip Band Flyers.

At this point in time I no longer faithfully wrote the opening act on the back of the ticket so I had to do a bit of research on that part. Since I was mostly clubbing to see bands, ticket stubs weren’t really a thing (just hand stamps). I know I saw other bands like Hurricane, Rough Cutt, and Poison, among others, at the Country Club 1986-88, but that we spent most of our band-watching time at other clubs around town (the usual places – Whiskey, Gazarri’s, Troubadour, FM Station, among others), but it wasn’t necessarily a time or place when I was good at keeping track of things ;o). And of course we can’t forget that Riki & Taime’s World Famous Cathouse opened in 1987, adding an entirely new dimension to the party scene. Good times, good times. 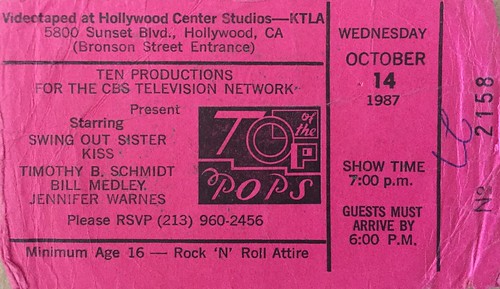