The following report was written as part of my graduate studies in General Psychology. It has not been published anywhere but this site. Please contact me before reusing or reporting this paper.

Assignment: One-page thought paper on a chapter subject applied to the topic of my choice.

The human need to belong leads people to affiliate with groups they are socially attracted to, which fosters a sense of social identity and interdependence that provide for a “psychologically meaningful group” (Fiske, 2014, p. 489). While social identity, which is the self-concept that stems from group membership, can be can be both individual-based or group-based, an integral aspect of group membership is that it provides a sense of homogeneity, or like-mindedness understanding, that humans seek from others. Because social identity is crucial to our well-being, our ever-changing personal situations affect the context in which we respond to and interact with the groups we belong to.

Several psychological theories apply to group identity and how we interact with groups in different contexts. Researchers have found that the “level of identity activated in a context” – how closely we identify with the group in that particular scenario – moderates how we evaluate, maintain, and/or depart from groups (Schmitt, Branscombe, Silvia, Garcia, & Spears, 2006). The researchers proposed that the level of identity, determined by Self-Categorization Theory (SCT), shows how group-related decisions are based on which aspect of self-identity, personal or social, is more important in the context. Self-Evaluation Maintenance theory (SEM) theorizes that some self-evaluations, or ingroup comparisons, can lead to rejecting a shared categorization because they apply “to contexts that make salient one’s personal identity” and are more intense and meaningful, whereas Self-Identity Theory (SIT) theorizes that such comparisons lead to acceptance of shared categorization because they apply “to contexts that make collective identity salient” (Schmitt, Branscombe, Silvia, Garcia, & Spears, 2006, p. 299).

Researchers have long proposed that “the self and identity are in constant development through social interaction” and that identity is an ongoing process (Davis, 2006, p. 63). An example of a closely-held group whose members are faced with an intense personal versus social battle in deciding whether to stay or leave are punk rockers, whose rebellious and anarchic subculture conflicts with the inevitableness of adulthood. Davis (2006) explores how this ideological group deals with punk identity as they age; after all, as the author notes, this group would seem to require one to “age-out” once some kind of mainstream adulthood, such as marriage or career, is accepted. However, the author theorizes that by looking at these aging punks in relation to their music “scenes,” one can conceptually see how these group relationships and punk identity have been maintained over time.

Davis (2006) interviewed numerous aging punks and found that those that who chose to remain a part of the scene made an effort to negotiate some type of incorporation into it as they got older, and found that the “successful punk type is able to enact a synthesized identity, incorporating the aging selves and the scene to negotiate a new sense of self.” These punks determined that it was important to maintain a connection with something that was such a significant and powerful aspect of their life; after all, to quote the true punks I knew personally: “It’s a lifestyle.” In applying Self-Categorization Theory, these punks contextualized a Self-Identity Theory that led to an evolved acceptance of the shared categorization with the more salient collective identity; they found a way to embrace adulthood but not at the expense of the scene.

On the other hand, “[u]nsuccessful punks…cannot accept those inevitable changes” and “reject either the scene or adulthood” (Davis, 2006, p. 64). Unsuccessful aging punks are either those old guys still sitting on the bar stool, or those that have completely disconnected from the scene. In applying Self-Categorization Theory, the punks who left the scene contextualized a Self-Evaluation Maintenance Theory that led to a rejection of the shared categorization with a more salient personal identity issue, likely that of being unable to overcome the conflict involved in accepting mainstream ideals.

I think that the use of “scenes” as a theoretical tool to explore the evolution of social identity in aging is useful in this context and agree that it allows “the process of identity negotiation to be examined and theorized in a more nuanced and thorough manner” (Davis, 2006, p.69). I personally have known exactly four punk rockers who embraced the lifestyle and have seen their evolution over the past 25 years; while all four remained as true to the lifestyle as possible, albeit with many accommodations for adulthood, the most intense of the four died suddenly at age 49. His partner died a few years later. Like some interviewees in the article, he was both often found at his regular barstool (the place at which his funeral was held), and yet also running a somewhat successful punk record label until the end. I have oft wondered if his soul was so in tune with the “lifestyle,” the collective salient identity, that he simply could not accept any further accommodations that would be required of reaching the age of 50. RIP, Stiff and Dreb. 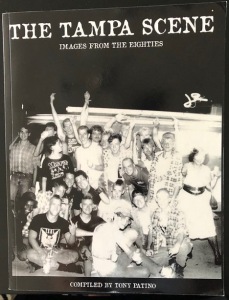 A shout out to the Tampa Bay Area punk scene. I won the 2015 book The Tampa Scene: Images from the Eighties, which reproduces a crazy big collection of local show flyers and photos, at a memorial benefit for a scene member (RIP, Dreb). Compiled by author and director Tony Patino, who is described as a “scholar of Tampa punk,” it contains many, many flyers representing the bands and clubs from that thriving scene: Bad Brains, Black Flag, Butthole Surfers, Circle Jerks, The Cramps, Dead Kennedys, Husker Du, Iggy Pop, Jehovah’s Sicknesses, No Fraud, Pink Lincolns, The Ramones, Rat Cafeteria, Roach Motel, Souxie & the Banshees, Suicidal Tendencies…at clubs like Janus Landing in St. Petersburg, The Ritz  and The Cuban Club in Ybor City, the Lonesome Coyote in Pinellas Park, and interestingly, at various all-ages community centers around the Tampa Bay Area. And let me tell you, it is priceless enjoyment to peruse these old-school pasted-up, hand-printed, hand-drawn pieces of art. The intro to the book says it all about the punk life and legacy:

If someone ever tells me that they used to be a punk rocker, then they weren’t a punk rocker as far as I’m concerned.” – Samytown-Fang.