The Monsters of Rock Cruise involves spending several days and nights strolling the ship seeing a bunch of bands in a variety of atmospheres – it’s a live music lover’s dream vacation. While it is not the least bit relaxing to the body, it is to the soul ;o).

The 2016 Monsters of Rock Cruise “Shredders of the Deep” East Coast event returned to the Port of Miami just over a month ago – it was another great cruise. Thanks goes to the Monsters of Rock people for digging up these bands and bringing them back to us. We think of Helix or Hellion or Tyketto or Kingdom Come and recall we liked the songs we heard on the radio – or we used to have that CD but it got traded or sold somewhere along the way – so we don’t always have their music in our digital libraries. These shows make me go dig up old albums and enjoy them all over again.

Overall, wow, a lot of these guys have really perfected their craft over the years – the majority of them sounded better than ever.

While there was an official pre-party show on Saturday night, we only made it to the Sunday night version (seriously folks, I cannot add yet another night to the week long party). I saw a bit of Saigon Kick (Florida band!) – sounded good; Winger – wow they have a lot of hits; and an all-star jam. I couldn’t tell you who all was playing, but it was an assortment of talent that culminated in Hurry, the Rush cover band with Sebastian Bach singing. Cool show. 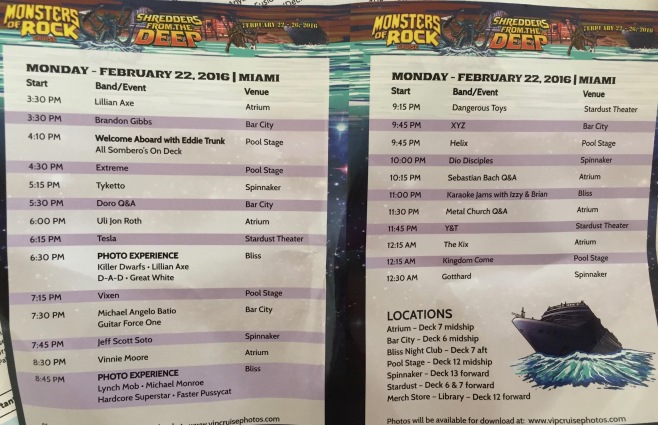 We boarded the Norwegian Pearl on Monday around 1 p.m. The ship had several stage areas: the Pool Stage, the Stardust Theater (in which everything sounded fantastic, and was more intimate than the theater on the old ship), Spinnaker (lounge bar with stage), the Atrium (main lobby with two levels of viewing area – open and comfortable and yet also nicely intimate), and Bar City (a smaller open lobby stage area between restaurants and bars).

Extreme played the Monday sail away show on the pool stage. It’s so awesome to watch a concert on a ship’s deck as you sail out to sea. Great energy, as always.

Next we went to the Atrium to see Uli John Roth for a few songs before Tesla, but ended up staying that entire show (knowing Tesla played again later) – it was an unexpected goodie. Guitars, guitars, guitars – a melodic Indian-ish groove. I’d like to know who was singing.

Back to the pool stage next to see a bit of Vixen  – they look and sound amazing; then on to see Jeff Scott Soto. Fantastic, fantastic  – I need to check out the new Soto album Inside the Vertigo. I “discovered” JSS in 2005 in a band called Soul Sirkus with Neil Schon, opening for Sammy Hagar at the Cabo Wabo Lake Tahoe – everything he does seems to have that raw rock sound I love. He closed with Stand Up & Shout – loved it.

On to Helix at the pool stage for a few before going back to see Dio’s Disciples. I love this band – the dual vocals are a dream to my ears. Ann Boleyn from Hellion got up and sang with them – triple vocal pleasure, great energy.

Later we went to Y&T in the Stardust Theater – WOW these guys are sooooo good, what an underrated group of amazing talent. How do you play lead guitar that way and sing like that together? I’ve always loved their shows but I guess you could say I really bonded with this band that night. I came back and bought their Live at the Mystic album, which my Y&T fan friend Kat Swicegood (check out her photos) recommended as her favorite. You gotta love a band whose live albums are their best ones.

The boat was literally rocking – back and forth – that night. You had to root your feet where you stood – I loved that. A gentle rocky motion continued all night – the hangars in the closet clanged quietly while we fell asleep laughing. It was probably the reason I felt like I was still rocking on my feet for the entire weekend after I got home from the cruise. 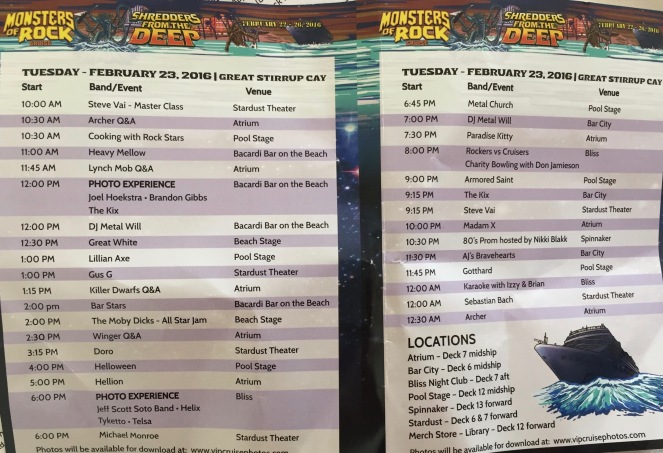 Tuesday we got up relatively early and went into the Stardust Theater to see the Steve Vai Master Class. It was cool to hear him talk about having Joe Satriani as a guitar teacher – the place was pretty packed.

We then took a ferry over to the Great Stirrup Cay private island – a nice, warm, and sunny day – where we heard Heavy Mellow and Great White from our beach chairs, then watched The Moby Dicks on the beach stage (a Led Zeppelin tribute band) – cool show.

Back on the ship we watched a bit of Helloween on the pool stage and then went to the Atrium to see Hellion. I am a new fan of Ann Boleyn – great band, great show, and love those vocals.

Next we saw Michael Monroe – not my favorite type of vocalist but I wanted to see what he was all about. I get it now – he’s got that pop-punk-rock-Jagger-DLR-prancer-all-his-own stage presence that makes for a fantastic showmanship experience. Cool discovery.

Afterwards we saw Paradise Kitty in the Atrium, an all-girl GnR tribute band, which has a kick ass guitar player, then on to Armored Saint at the pool. Next stopped over at Bar City to watch a few songs of The Kix, a three-piece-girl band that does 80s covers – saw them do ZZ Top and Queen.

Checked out a few minutes of Steve Vai in the theater, then back to Madam X in the Atrium. Loved seeing those guys; I have a vague recollection of seeing them in L.A. at maybe the Troubadour or Gazarri’s or somewhere like that back in the day. Good songs.

Wednesday morning started off with Joel Hoekstra’s Bloody Mary Jam at the pool stage. Gosh, how I love a Bloody Mary for breakfast on a sunny vacation day. This was another one of those oh-so-special musical treats. It started acoustic then went all out full-sound and Jeff Scott Soto got up and sang Here I Go Again, and Todd La Torre of  Queensryche sang Love Ain’t No Stranger. All on a sunny deck out in the ocean – a perfect vacation day.

We went over to the theater later to see Tyketto, which was one of the most memorable shows to me. I was enjoying sitting at the pool when I saw they were on so we popped in for a few songs – and ended up staying the whole show. They sounded fantastic and emanated that thing that makes for a great show, where it doesn’t matter if you don’t know the music. It was great stuff and I would definitely go see them again. I had what you might call an “experience” during the song Forever Young – I knew somehow then and there that my 26-year old niece wasn’t going to make it (and she did in fact pass away the next day). Intense show for me. I bought their album Don’t Come Easy when I got back – loving the whole thing.

Next we went back to the pool stage for more Y&T, then to the theater again for Kingdom Come. Ashamed to say a band I kind-of-sort-of forgot about. I’ve always liked that unmistakable haunting reverberating sound – yet I have never owned any of their music. It was another great sounding show in the theater, a perfect venue for them. I came back and bought their 2003 Millennium Collection Best of Kingdom Come album.

Next over to Spinnaker to see D.A.D., then Helix, then back to Bar City to see a bit of Archer. Then on to the Atrium for Armored Saint, then to the pool stage for Steve Vai. That show was THE LOUDEST SHOW I HAVE EVER HEARD…it was painful to my double-stuffed ear-plugged ears and I simply had to leave. How can anything be THAT LOUD on an outdoor deck in the middle of the sea?

Later we saw Killer Dwarfs in Spinnaker and I agree with the singer when he said his voice was like a “cheese shredder” – but as always I enjoyed them and hearing the ever-optimistic-ist song of all time, Doesn’t Matter.

Later we sat around chatting with a bunch of cool Canadians on the upper deck and ended up being smack dab in the middle of the “Kate & Chip (Z’nuff) Wedding Vows” wedding party gathering area. A very rocker wedding party –  Sebastian Bach married them on the pool stage and then sang a somewhat sufficient version of Sweet Chip [Child] of Mine.

I forced myself to stay awake for two late shows that night – Faster Pussycat‘s and Lynchmob‘s only shows. Lynchmob went on at 1 a.m in the theater – guys, there are not many bands I will do the really late night thing for. It was worth it – and as if anticipating my yawns, the first five songs they played were straight from my iPod gym workout folder and it was worth the wait. Hell Child, hell yeah.

Thursday morning started with Vinnie Moore at the pool stage. It was an odd weather day – after days of sunshine, Nassau was like a cold, grey frozen tundra (this from a Florida girl, so take it with a grain of salt – it was windy and in the 50s). Next up on the pool stage was a great new discovery to me, Hardcore Superstar. Crazy blend of the best 80s bands and stage energy.

Tesla did an acoustic set on the pool stage next – awesome, as always. Beautiful show in a breezy mellow storm. We then went off to have sushi while we watched Brandon Gibbs at Bar City – great vocals. Then back to the pool stage to see Sebastian Bach, who as always put on an energetic stage show. Loved the Tom Sawyer mixed into Monkey Business.

Next up was Queensryche on the pool stage. I love them with their new singer – Todd La Torre pulls it off with a connection that negates any simple “replacement singer” phenomena – he fits. They did quite a few from my favorite, Rage For Order.

Lastly, we dragged ourselves into the theater to see a few Saigon Kick songs – and saw a song or two from AJ’s Bravehearts at Bar City on the way back to some much-needed sleep. So much music to see and hear, so little rest.

Who did I miss? Lillian Axe, Doro (bummer!), Dangerous Toys, XYZ, Metal Church, Gotthard (really wanted to see them), Gus G., and Helix (I saw a few minutes of this show but it conflicted with another that won out). I saw A LOT of bands – some for the whole set and some for only a song or two. It’s also great fun to simply hang out with people and chill – I seemed to meet a lot of people from Sweden and Germany – lots of cool people to meet.

The cruise was different from past MOR Cruises in a few ways – overall, the atmosphere seemed more intimate. I look forward to the change of pace again with the 2017 MOR Cruise, leaving out of my hometown Tampa Bay area and heading to new ports ;o). 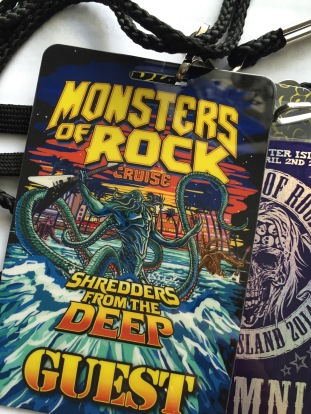