I call this show rare because I’ve seen a lot of Candlebox shows over the past 10 years and this one was quite different from the rest – or from any other show I’ve seen in a while for that matter. It was a cool and unique experience.

When I saw the Ruth Eckerd Hall email about an acoustic Candlebox show at the Capitol Theatre I was immediately intrigued. And maybe a bit disappointed – the Candlebox band puts on an amazing show and I was in the mood for, and in need of, a good Candlebox concert. But I was also excited for what was likely going to be a great vocal-oriented show. It was. There was an intimate crowd of about 500 (taking a stab at that – the theater holds 750) in a setting similar to VH1 Storytellers. You never know what you’re going to get with an “acoustic” billing these days, but this was stripped down to Kevin’s song stories and two acoustic guitars.

If you are a big fan of Kevin Martin’s vocals and Candlebox songs, particularly the 1993 debut album and the 2008 Into the Sun album – as my husband and I both are – then this was a fantastic experience. If you are a casual Candlebox fan and were already in a depressed mode – as were the two people we were with – then this was a bit of a letdown from the amazingness that is a regular Candlebox concert. Discussion of the Paris and Beirut bombings, religion, and lost loves set a somber mood at times. But I thoroughly enjoyed this upfront and personal show experience.

My first memory of Candlebox is hearing the lyric “I didn’t mean to treat you oh so bad but I did it anyway.” Ha! I think everyone can relate to that simple line at one time or another, in one way or another – but when Kevin sings it he sounds like he means it. I don’t think I ever bought their debut self-titled CD back then – the first Candlebox CD I bought was 1998’s Happy Pills for the song 10,000 Horses.

But then years later, in 2006, I saw Candlebox play live for the first time, and again shortly thereafter down in South Florida. I went to see Buckcherry but I left a huge Candlebox fan. I was blown away by their songs and show and energy. I bought their debut album, and then some others, and then Into the Sun, which is a GREAT album all the way through. Gotta love a band that gets you because of their live show.

Of course I went to see Candlebox every time they came to town after that. If someone were to ask me about the best concert I’ve ever been to (which is a mind-boggling question), one particular Candlebox show at Jannus Landing in St. Pete would come to mind. About five hurricanes had just passed over and around the state of Florida and we were in the middle of two of them – one far away (behind?) to the north and one to the south. It was about 500% humidity and I don’t know exactly how it happened but that show was like a sweat lodge spiritual experience. One of those magical interaction shows. They always had an amazing energy at Jannus Landing. Kevin did mention that he drew his best crowds in Florida and New York. It’s interesting how certain artists have connections with certain cities.

Back to Saturday night in downtown Clearwater: Kevin told stories about the songs and sang the way that only he can. He did some of my favorites – Cover Me, Miss You, Breathe Me In – and some stuff from the new album which was immediately likable, particularly Spotlight. 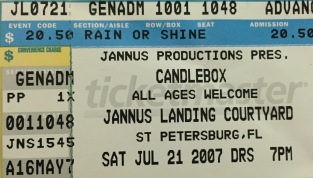 We learned that his ex-wife is a scientologist, which he had mentioned when Candlebox played in downtown Clearwater in 2013 or ’14 (I can’t find that ticket stub). The Capitol Theatre is smack dab in the midst of scientology’s worldwide headquarters. It’s a cute little downtown with a weird vibe – but I appreciate Ruth Eckerd Hall’s restoration of the historic theater and attempt to revive the area.

More importantly, we learned that he is still married to the woman he wrote the song Breathe Me In for. I had wondered about that. Thanks be. Since it is quite possibly the most beautiful love song ever sung, one can’t help but sincerely hope that he lives happily ever after with this woman.

I am somewhat sad that long-time Candlebox guitar player Peter Klett has left the band (I need to check out his new project, Lotus Crush). He plays Candlebox songs so beautifully and I will miss that – I don’t always tune into a guitarist as intently as I did him. I have high hopes for the new guy who played with Kevin at this show, Mike Leslie. He plays a mean acoustic. I look forward to the new Candlebox album next year – I preordered it on PledgeMusic and get cool little snippets of studio work on the app every once in awhile.

Kevin mentioned coming back to St. Petersburg’s Jannus Landing next time around and the crowd went nuts – we’d all be really happy for that. Except that it probably won’t be at Jannus Landing, or Jannus Live as it’s called now – which mostly books music for a different generation these days (except for the occasional free tribute band shows, which are very cool, and Steel Panther last May). Candlebox will probably play future shows at the new Concert Courtyard at Ferg’s down the street by the Tampa Bay Rays’ stadium. I saw their opening debut concert with LA Guns, Warrant and Ratt a few weeks ago and it’s a cool outdoor venue, slightly larger than Jannus. It’s fantastic to have a new music venue that is only a short Uber ride away.

But anywhere or anyhow Candlebox ends up next time around, I’ll be there ;o)

A moment of chill under the full #snowmoon2020 on the top deck of the #monstersofrockcruise 🤟🌕🧘‍♀️✌️💛🎼☺️
When you get sent home from work at noon due to a mysterious power outage on a beautiful 68° and sunny Florida winter day and wonder if you are self-disciplined enough to work from home and then remember you have a half a bottle of Bailey’s left over from the holidays...☺️🤘🦅 🌞☀️🌴✨#thankyouuniverse #lifeisgood #lovewhereilive #lovemypatio 💛
%d bloggers like this: